Four clubs advance to the semi-finals, but who makes the Roscommon Herald IFC Team of the Week?

St. Faithleach’s edged the battle of the heavy hitters at Strokestown against Fuerty, Clann na nGael’s incredible season continued as they found the net four times against Creggs, while Castlerea St. Kevin’s are back on an upward trajectory after avenging last season’s championship defeat to Éire Óg. There were also comfortable wins for Shannon Gaels and St. Dominic’s, as the intermediate championship whittled itself down to just four teams. So out of all that, it’s time to settle the really big question – who made the Roscommon Herald intermediate team of the week?

There aren’t too many smaller goalkeepers taking up starting jerseys around the county, but there’s no lack of bravery in the play of Hannon, who made a couple of excellent stops and threw himself into contact time and again at Athleague.

The St. Dominic’s back line was completely in control of things against Kilbride, and there would have been a case for most of their back division to be included – but for sheer energy and zest in the tackle, Kenny gets the nod after putting in a very competent showing in the full back line.

A very highly rated Creggs attacking unit never really got off the ground in Athleague, and if it wasn’t for the six-point contribution of Shane Dowd at midfield and a couple of excellent scores from Darren Gately in the corner, they’d have been kept completely under wraps. Harney was a key ingredient in this, holding his position well, competing aggressively for 50/50 ball and driving out with purpose.

A slight positional adjustment here as Conroy played most of the game against Éire Óg in the half back line, but he still had a strong defensive focus and could have done this job just as easily. Conor Cox may have run riot for the Loughglynn club but outside of that, the Castle back line was in complete control, which laid the foundations for their win.

As is usual, McCormack ruled his defensive kingdom with an iron fist and still found time to get forward and play a key role in the attacking game for his club. Darren Clabby may have scored two goals but neither can be laid at the feet of the St. Dominic’s number six, who is very much the driving force of this team.

Marking Noel Gately was a very significant assignment for the 2006 Roscommon minor captain, and Flynn led by example in the best possible way for his team, dominating his individual battle and even making the time to burst forward and chip in with a late point to help settle the team. He’d be well able to hold his own at senior level if needed, but it’s a huge blessing for Niall Shine and the intermediate panel that he hasn’t been called upon. 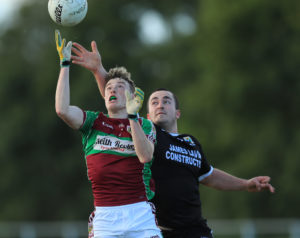 Keenan was up and down the flank in Strokestown, which was a vital piece of the puzzle for Castlerea against an Éire Óg side that is well able to play ball, but sometimes lacks mobility in key areas. He’ll face a very different challenge next time out taking on Mikey Dunne or Kevin Farrell, but stopping Keenan will be a big part of St. Faithleach’s plans all the same.

We will add a word here for Dessie O’Beirne of Shannon Gaels, who was outstanding in the club’s relegation playoff against Ballinameen. On most weeks, his efforts would have been enough to earn him one of the slots, but Keenan just about edges it.

Rooney has made this team in three of the four weeks so far, and is undoubtedly in the form of his life for the club as they try and regain senior status. In every game he goes about his work quietly but with intensity and focus, adding an extra scoring dimension to the attack while also carrying a lot of ball and opening doors for the star players in double digit jerseys.

When the game was going away from Creggs in the second half, Shane Dowd tried to do more up front and he came up with the goods, bringing his total for the game to six points. However when he did push forward, his influence was sorely missed at midfield as players like Seán Fallon and Killian Bannon thrived in his absence. That, as much as anything, illustrates his value to this Creggs team.

McDermott’s injury issues have clearly been well and truly put to bed as he put in a very impressive showing against Éire Óg, chipping in with five points, three from play. If he’s fully on form, he adds a very different dimension to the Castlerea attack which in turn, opens up space and opportunity for other players around him and closer to goal.

When a game is decided by a single point after 80 minutes of action, it’s fair to say that there’s not a lot between the teams. Lyons was one of the main contributors on the Fuerty side, not so much on the scoreboard but in terms of putting in the hard yards in the middle and making life difficult for the opposition. If he continues this resurgence, he could yet have a role to play with the county in 2022.

Dockery is a very different type of player to a lot of his colleagues in the Knockcroghery club – he’s an imposing physical presence and he’s very happy in a dogfight where it’s all about getting your tackle count up. That said, he’s still very capable of moments of brilliance, particularly his high catch early in the second half that helped set up a point for Cian Kelly. 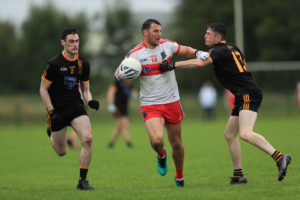 Our free-scoring full forward line, who chipped in with a rather ludicrous 0-31 between them, starts off with a man who was responsible for a dozen of those points. After starting slowly this summer, Murtagh has begun to completely wreak havoc on opposition defences and on this form, it’s hard to see Castlerea having any answer for him next time out.

There isn’t much left to be said about the big Éire Óg man, who like Murtagh, has now made this team three weeks in a row. His performances for the club make it plainly clear that his only position is close to goal, where his ability to whip the ball over the bar with little or no room to shoot makes him almost impossible to stop.

Like Cox, Kilroy did everything he could for his club but it just wasn’t quite enough. Nine points, deadly from frees and lively from play, St. Faithleach’s could do very little except try and get bodies around him to close off the danger as best they could. It was enough to advance, but not enough to knock the dual player out of our team of the week selection!