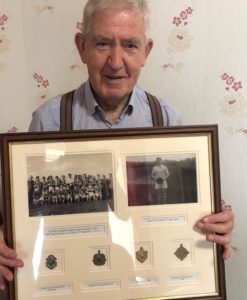 Prologue: If your dad was a student in the Vocational Schools (Techs) system of County Roscommon in 1952, was around 16 years of age and was a decent footballer, then this might interest you.

Last spring, I received a very interesting phone call from a former student, Kevin Cryan from Ballinafad over the county border in Sligo.

He asked me if I knew anything about an “All-Ireland” won by Roscommon in 1952. Now, with a question like that, Kevin immediately had my full attention.

I assured him that I would have been aware of it if Roscommon had won an All-Ireland at any time.

“I’m telling you now that Roscommon won an All-Ireland in 1952,” he asserted confidently.

“My uncle, Vincent (Vinny) Cryan, played on the team and can prove it. He has a lovely medal from then, which holds an honoured place in a frame in his home in Portarlington where he had a shop on Main Street and where he still lives,” continued Kevin.

I assured him that I would investigate his information. When I sourced my “Google” — GAA historian Colm Hannelly — even he was surprised with the details.

I had a couple of pictures from that time of Boyle “Tech” football teams and there was a John Cryan in one of the pictures. This turned out to be a brother of Vinny, the footballer in question.

John had also gone to Boyle Vocational School, or the “Tech” as it used to be labelled for decades. That was in the late forties and early fifties.

Kevin continued to get as much detail as he could regarding his uncle’s claim and contacted his cousin (Vinny’s son Declan) who was involved in schools’ football in Kildare.

After some time, a clear summary of the 1952 campaign emerged with a WhatsApp from Kevin, as told to him by his uncle Vinny and Vinny’s son Declan. They laid it out as follows:

The medal was won in 1952; Roscommon defeated Galway in the All-Ireland final; Vincent Cryan played at number 6; The semi-final was played against Longford in Elphin; The final was played in Ballinsloe; The only player Vinny remembers was number 3 at full-back. His name was Moran; There was a trial match in Elphin with ten players from each school — Roscommon, Boyle, Elphin, Castlerea and Ballaghaderreen; Vincent was the only player selected from Boyle.

This information was accompanied by a photograph — a framed picture of a very impressive medal. The accompanying message was that the medal was sealed in its frame and that it was not to be touched.

The message concluded: “Trusting that this helps in your investigation of Roscommon winning another All-Ireland that ye are not given credit for…and that from a Sligo man!”

While these messages were coming to me, I was contacting sources that might throw some local light on it all. These included Danny Burke, Paraic Brennan, Frank Kenny and, finally, Mark Kennedy.

All expressed surprise but, as they had come to their respective schools nearly a decade later, the success didn’t occur during their tenure.

Mark Kennedy came up with a page from a slight history from decades ago that gave some insight into football activity in the “Techs” during their early days. They began with the odd “challenge” games and after some “real” games.

A former Galway footballer, who was a teacher in Athlone, by the name of Kieran Hunt helped to promote the first real intercounty Vocational Schools’ games competition (official records really only exist from the 1960s).

The manager of the Roscommon team may have been Bob O’Connor. He was teaching in Elphin Vocational School then and, since the Roscommon trial game and the match against Longford was played there, Bob might have been the facilitator of all this. Bob was also involved with county senior football in Roscommon.

Sligo dominated the Connacht Vocational Schools’ scene through the fifties and it was only in the sixties that intercounty Vocational football took on a more organised footing.

Anyway, my focus remains with Roscommon’s win on the first Vocational Schools’ “All-Ireland” final win against Galway in 1952. Vinny’s evidence is clearcut and he has the fine medal to prove it.

So, I thank my Sligo friend Kevin, his uncle Vinny and his cousin Declan, for the information. I hope that, from somewhere in Roscommon, we can discover similar medals from 1952 and get to know who the members of that team were. 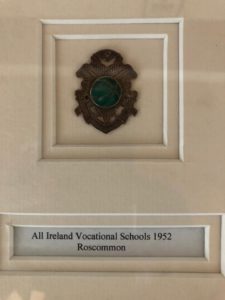