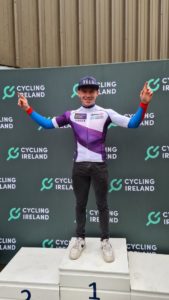 Feeley, riding for the All human/VeloRevolution team, has already won the National Road Series this season, and his good form continued on Sunday to enhance his burgeoning reputation.

Competing in the elite men’s road race, a race that featured Nicolas Roche, Eddie Dunbar, Sam Bennett and defending champion Ben Healy, Feeley found himself in the lead group before breaking away with Ryan Mullen — Thursday’s time trial winner — on the last lap for the top prize.

In a sprint for the line, Feeley was just edged out by Mullen, but it was still a terrific performance from the Roscommon cyclist who continues to go from strength to strength on the national and international stages.

“I thought I had him (Mullen), to be honest, coming in the road. I was on his wheel but his experience stood to him at the end of the day. I can’t complain with second against that field.

“It’s my first national senior medal — a silver — hopefully, we can get the gold sometime.

“I love riding my bike here. I have a great team, great sponsors; Everyone gets on like a house on fire. I don’t want to change that for the world,” said Feeley afterwards.