After a long group stage that ultimately, didn’t tell us a lot about the relative health of the main contenders for the Roscommon senior hurling championship, the race for the Mickey Cunniffe Cup exploded into life on Sunday afternoon Athleague. A county final between Pádraig Pearses and Four Roads was the expected outcome, but instead the two sides of Athleague parish came up trumps in dramatic finishes. This week’s Roscommon Herald, which is on your shelves today, has full reports, analysis and reactions from the two games – but here is the only place to find the Team of the Week!

He was dreadfully unlucky in the first half with the long shot from Tomás Sweeney that left him looking directly into the sun, but he more than redeemed himself with a great showing in the penalty shootout. Eoghan Costello’s effort was not well-struck and so was a relatively easy save, but his stops to deny Leon Feehily and Cathal Kelly were incredible. 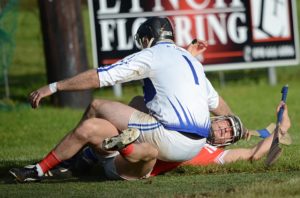 A slight positional switch here as Melia was on the edge of the square for Tremane, but his performance still warranted inclusion as he did well against a very powerful and rangy opponent in Brendan Mulry. As long as Tremane kept the goals out, they were always going to be right in the hunt and Melia was a big part of their success on that front.

Arguably the best performance of the week came from the Pearses full back, who was an absolute rock on the edge of the square. It felt like every ball that went into his vicinity was secured and cleared with the minimum of fuss. He even drove forward to win what looked like a vital free deep into the second half, one that put Pearses two up. If the rest of the team was even halfway up to his level, they would have seen out the win easily.

Taking on Robbie Fallon was no easy task but Dolan won that battle well, and kept looking after his corner very efficiently when Aengus Lyons came in to replace the Athleague veteran. Officially he’ll go down in the record books as the man who got two yellow cards and didn’t get sent off (the first one was wiped for the ‘new game’ of extra time) and he was guilty of a few fouls, but unlike a lot of his colleagues, Dolan tended to foul in places where he couldn’t afford to let his opponent go any further.

Connolly’s performance was everything you’d expect and more from the veteran defender. Like a lot of his colleagues, he had to put a very tough defeat in the Fuerty colours a week previously behind him, and he did that very well with a display that was measured, controlled, and hugely settling to his colleagues around him.

Brennan put in a a commanding performance, especially in the second half where his reading of the game from centre-back was superb. He was a colossus under the dropping ball and while rushes of adrenaline meant that sometimes his deliveries forward carried too much length and drifted wide, he was dominating a key position on the field for his club.

Both Naoise and Eoghan Coyle were impressive for the Athleague men, but we’ll give Naoise the edge here since the vacancy is in his position of left wing back. Defensively, he was strong in the tackle and put a lot of pressure on the ball striker without giving away frees, while a couple of trademark forward runs were instrumental in setting up Athleague scores. 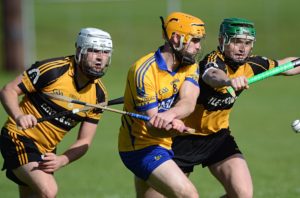 The county man was the engine of his team, to the fore of all their best work on and off the ball. Kellehan’s appetite for hard work is unrivalled, and he was at his brilliant best on Sunday afternoon.

Always in the thick of the action, frustrating Four Roads with his physicality or by getting a block in, he was on hand to land a huge score from distance as the game ticked into injury time.

Oddly, it was actually a close call as to whether or not to include McGahon, even though he ended the day with a remarkable 0-13 to his name. He hurled a decent amount of ball from midfield too, but will be disappointed that he missed a couple of clutch chances, including at the end of normal time and again in the second half of extra time. His penalty was also fired way over the bar, so there is room for improvement. Conor Coyle (Four Roads) was the man who was closest to snatching this spot from McGahon.

Had a tough opponent in the shape of Micheál Kelly, but went toe to toe with the Four Roads talisman throughout and had his share of wins. Moreover, even when he didn’t win the first ball, he ensured that Kelly was disrupted in his work, which was significant in terms of the supply of ball to the Four Roads inside line.

There’s no point pretending otherwise – O’Meara’s job got a lot easier when Shane Naughton got injured, and he’ll be disappointed not to get on the scoreboard. That being said, he put in a hard shift of work, hoovering up a lot of scrappy ball and moving it on, particularly in the second half when the absence of David Flaherty and the extra man on the Pearses side might have become a decisive factor. O’Meara was a big part of why Athleague were able to overcome that. 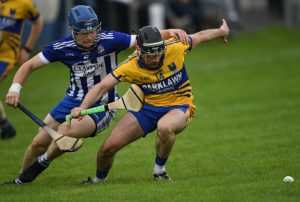 Started in the full forward line but was moved out the field in a bid to get him on the ball more, and sure enough he grew into the game even more when he was able to get the feel of the sliothar that bit more frequently. He’s still the key man in terms of scoring for his club, and will have a huge role to play on Sunday week.

The only Four Roads player to score more than a single point from play, Lohan is still a teenager but already has become a key figure in the Tisrara club’s attack. The absence of Conor Mulry put a lot of pressure on the rest of the forward division to step up their game – Lohan was the only one who delivered on that expectation. There’s sure to be a rethink of the club’s approach next year, and he’s likely to be a big part of a restructured team in 2022 and for a long time to come.

Outside of his scoring, he didn’t do a lot – but on a day when Athleague scored a mere five points from play, Kelly delivered four of them. He was the one player who looked like he wanted to attack the Pearses back line, and while he’ll be disappointed that he didn’t find the net with his first chance, he went on to play a key role in their win.

Like Lohan for Four Roads, lots of more experience, proven players around him were struggling to put their best foot forward, so Finn stepped up to the breach and had a very impressive outing. Physically, he has a long way to go but in terms of his hurling, he’s well able for this standard. He played a key role in setting up Matthew Comerford’s goal, his point at the end of normal time looked like it might be a match winner and it would have been more than worthy of that accolade, and he stayed the pace well for 80 minutes.

Four clubs advance to the semi-finals, but who makes the Roscommon Herald IFC Team of the Week?