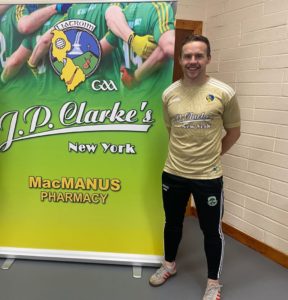 His appointment was ratified following a Leitrim GAA Executive meeting on Wednesday evening.

Moran a former Footballer of the Year, and winner of eight Connacht SFC winners medals, will be assisted in his role by fellow Ballaghadereen GAA man, Mike Solan as Assistant Manager, and former Leitrim players Barry McWeeney and James Glancy as selectors.

Moran, McWeeney and Glancy won a Sigerson Cup together while students at IT Sligo in 2005.

Moran currently co-manages his native Ballaghadereen GAA senior team along with Solan – but it’s understood an agreement is in place whereby the duo can complete their commitments on the club front over the coming weeks, while beginning work on preparing Leitrim seniors for the 2022 season.

Andy Moran played senior Inter-County Football with Mayo from 2004 to 2019. The holder of the all-time Mayo appearances record has played six All-Ireland Finals with Mayo over that period. He is a two-time All-Star winner and holder of eight Connacht SFC Medals and was chosen as Footballer of the Year in 2017. He currently co-manages his native Ballaghadereen GAA Senior Team while still a playing member of the team in the Mayo SFC. He has previously coached the Mayo Under 20 Team in 2020.

Mike Solan, who joins Andy as Assistant Manager, has previously managed Mayo at Under 20/21 level over the seasons 2016-2020. During that period, he presided over two Connacht Championship winning selections, while also being at the helm as Mayo captured the 2016 Under 21 All-Ireland title. He is currently Joint Manager with Andy at Ballaghadereen GAA and has won two Mayo SFC titles with the club as a player in 2008 and 2012.

Barry McWeeney is a former Aughnasheelin footballer and has played with Leitrim at all levels. He was a very committed member of the Leitrim Senior Football Panel from 2005 to 2014 and was a most accomplished defender. With his club he has won two Leitrim Intermediate Football Championships in 2008 and 2017, the latter of which saw him captaining the team to victory. He is currently heavily involved in coaching within his own club.

James Glancy, a former Glencar/Manorhamilton footballer has had a long career in the colours of Leitrim at all levels, representing the Seniors from 2003 to 2014. He has had representative honours with Connacht in the Interprovincial series, and is the holder of five Leitrim SFC Medals with his club, having featured in nine senior deciders and being a member of the famed 4-in-a-row team of 2008-2011. James has vast coaching experience at all levels.