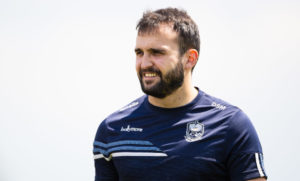 Boyle and Roscommon senior footballer Donie Smith is a strong advocate for change in the intercounty football calendar. In his capacity as the county’s GPA (Gaelic Players Association) representative, he’s asking the clubs of the county to vote for radical change when they consider the motions that have been proposed to overhaul the intercounty calendar.

Clubs in Roscommon have just a few more days to reflect on the proposed changes to the intercounty championship system before they feed their views back to the county board in advance of the GAA’s Special Congress at the end of the month, and Smith is hoping that when the 32 clubs finish their deliberations, they’ll come back with a resounding vote of support for Proposal B.

“The first and main reason I hope this proposal passes is more games,” he said.

“I’ll be 29 in February and if this system passes, I’ll be envious of all the 19 and 20-year-old players out there who will have seasons that are full of football to look forward to”.

Smith shared the widely-held view that Proposal A, which involved one Ulster team and one Leinster team joining the Connacht championship each year, was unlikely to succeed and so the GPA, including the Roscommon panel and management, are strongly endorsing the second proposal, which will see a Connacht championship played on a round robin basis in spring, followed by a league-style championship season.

“Every county will be guaranteed a minimum of 12 games in the year, and hopefully more. At the very least, five of those games for us would be played here in Roscommon at Dr. Hyde Park, and that would generate a huge amount of interest and excitement for players and supporters,” he felt.

“When I started playing with Roscommon, you did it because you wanted to play big games in front of your own supporters. Right now, we might only play a few league games here at home, whereas this system will mean big Connacht championship games, and then All-Ireland series matches in the height of summer, competitive games against other teams at the same level.

“One thing about a league system — everyone is in the division they deserve to be in. There’s a lot of talk from some Division Three and Four counties about lack of exposure, not getting on the Sunday Game on TV and so on, but to do that, you have to win games and move up the pecking order.

“And even for those counties that start this new championship in the lower divisions, they can win all their games in their division and get into an All-Ireland quarter-final. For a lot of them, that’s a much more plausible route to that stage of the championship than what they have now,” explained the Roscommon forward.

“Do you think Dublin or Kerry are completely invested in winning their provincial title?” he asked.

“Even when Mayo were at their best and were the closest team to Jim Gavin’s Dublin side, they struggled to get out of Connacht — they can take it or leave it. In Roscommon, of course we want to win our provincial title, but our main goal is to move onto the next level and make progress in the All-Ireland series.

“Before, when Leitrim or Sligo were drawn out against Mayo, they basically gave up the ghost straight away. Now they can look at winning two or three games, trying to edge their way into a Connacht semi-final, and, most importantly of all, getting a run of games together as a team. Before they were looking at maybe two games in the year”.

“Teams will always have different goals, but in league or championship, I’ve never gone out for Roscommon and played a match against a team that weren’t trying. Once that Connacht championship starts, teams will pick up momentum and they’ll all want to make progress.

“It all comes back to more games. Whether you’re in Division One or Division Four, there are a lot more games under this system. Then, when it’s all said and done, everyone bar the All-Ireland finalists are over and done by the first week in July, so you have a good summer with your club. There’s so much to be said for it”, he concluded.