Are Pearses coming to the boil at the right time? 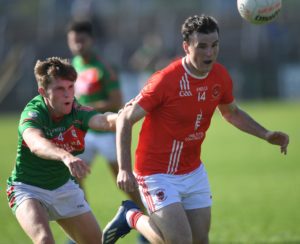 It’s a huge weekend in the local club football championships season with the semi-finals of the senior and intermediate competitions down for decision. IAN COONEY takes a punt at who might make it to the finals…

There was a feeling that Pádraig Pearses were slipping away from the principal protagonists for the Fahey Cup a few weeks ago, but manager Pat Flanagan and his players have proved that rumours surrounding their possible demise have been greatly exaggerated.

Ruthless against Tulsk and quietly efficient against Boyle in their last two games — whisper it quietly, but there are signs that Pearses are returning to the form that allowed them rewrite the history books two years ago.

The catalyst has been the return of Paul Carey to their inside forward line. Carey’s enthusiasm, and directness, is infectious, occupying the thoughts of opposing defenders to the point where players like Lorcan Daly, Conor Payne, Niall Carty and Hubert Darcy have that degree more freedom to exert their influence.

Further back the field, Pearses have the personnel, and patience in possession, to win a championship. David Murray has been superb throughout the campaign. His direct running hasn’t been tracked by a few teams now, so Brigid’s will need to be mindful of that on Saturday evening.

As for Brigid’s, they’ve recovered from their opening round setback against Oran to go about their business diligently. The return of Peter Domican and, more particularly, Eddie Nolan has helped but the uncertainty surrounding Ruaidhrí Fallon’s availability for the remainder of the championship is something manager Benny O’Brien could do without.

Ben O’Carroll and Brian Derwin will do well to find the space they unearthed in recent games but, regardless, there appears to be very little between the teams.

It’s not that St. Brigid’s standards have slipped, notwithstanding their opening round blip against Oran. But Pearses are coming to the boil nicely, and they have the motivation to put the wrongs of September 2020 right.

After a pulsating encounter, the 2019 champions may just find a way to prevail.

Everything here points towards a Clann na nGael victory, but semi-finals don’t work like that.

After quenching Oran’s championship ambitions, Roscommon Gaels won’t be short on confidence but it’s a completely different challenge trying to silence the neighbours from out the road than pulling the rug from under a grizzled, solid and well-drilled outfit, which Clann na nGael are.

The Gaels gameplan won’t be a surprise to Clann manager Liam Kearns. Cathal Dineen will line out at centre-forward and will drop back as a sweeper, and alongside David O’Gara, John McManus and Richard Hughes, they will try and erect the foundations for victory.

Their primary job will be to deny Clann the time and space to create the chances they executed so brilliantly during that opening half demolition of Glaveys. Putting out that fire will be one thing but where the Gaels are going to find scores of their own, even if Peter Gillooly returns from injury, is another.

Only a few years ago, the Gaels were relying on Scott Oates, Cian Connolly, Mark Nally and Ronan Carolan for the bulk of their scores. Gillooly’s absence so far has blunted their attack further, and that’s bad news against a Clann rearguard where Jack Connaughton and Fearghal Lennon have been impressive.

The worry for Clann is what happens if Connaughton, Lennon or Ultan Harney pick up an injury. It’s not that Clann don’t have the depth to replace them, but their presence is absolutely crucial to Clann maintaining the high standards that Liam Kearns will have demanded this week.

Clann set the bar outrageously high against Glaveys. Now, it’s incumbent on them not to fall too far below the heights they reached last time out.

If they can manage that, they’ll reach the final

Of all the teams St. Dominic’s didn’t want in a semi-final, Clann na nGael have the potential to be last year’s beaten finalists’ worst nightmare.

The expectation of a Dominic’s v St. Faithleach’s final is very tangible, but Tomás Gilleran’s side will have a day’s work done if they manage to overcome a Clann outfit that contain a terrific mix of youth and experience.

History has taught us that Clann na nGael has been hugely successful as a club when both its first and second teams are involved in the business end of their respective championships. It’s something the club takes great pride in, and one can imagine the expectation around Johnstown ahead of this weekend’s big matches.

What’s more, Clann are here on merit. Despite blowing a big lead against Ballinameen, Niall Shine’s side have been foot perfect, and have kicked on from their Junior A triumph against Brigid’s at the end of June.

David Flynn, Ronan Gavin, David Connaughton, Ross Naughton and Jonathan Dunning have county senior football medals in their back pocket, but the ethos of the club ensures that experienced players have no issue dropping to a lower level to help younger players come through the ranks, a philosophy that continues to stand Clann in good stead.

Dominic’s have been forewarned and they will look to their half-back line, especially Eoin McCormack and Brendan O’Meara, to launch their bid for victory. Jack Lohan’s energy compliments Tom Appleby’s ability around midfield, while Darren Donnelly and Conor Fallon have the scores in them to register a match-winning scoreline.

It promises to be a fascinating contest with Dominic’s, as long as they don’t focus on what could potentially be coming down the tracks in the final, given the nod for a narrow victory.

Once again, the form points to a straightforward victory for Faithleach’s, but try telling that to a Castlerea side that find themselves liberated from the shackles of adjusting to life at intermediate level.

For the time being, this is the level Jason Reilly’s charges must contend with, and another good showing here will fuel the desire embedded within a relatively young side to make further inroads in the years ahead.

Now that the building blocks have been put in place, this mammoth task will give Castlerea a fair indication of just how far down the road they are. Jack Keane, Michael Conroy, Fintan Kelly, Shane Keenan, Aaron and Adam McDermott, and Jonathan Hester were to the fore in silencing Éire Óg, but this is another step-up against a side that are many people’s fancy to capture the Jamesie Murray Cup at the end of the month.

Diarmuid Murtagh has been pivotal to Faithleach’s prosperity this season, and Castlerea are just going to have to accept that he’s destined to have a major influence on this match. Instead, Castlerea’s focus should be diverted to further out the pitch where, in the continued absence of Brian Murtagh, Faithleach’s gameplan to get the ball to their talismanic full-forward must be disrupted.

But it appears that Castlerea will have too many fires to put out. Jonathan Hussey, Ciaráin Murtagh, David Rooney and Kevin Farrell have been doing their bit for Walter Burke’s side too.

In other words, the Ballyleague-based outfit appear to have too many aces, although Castlerea’s renewed spirit will ensure that the pre-match favourites will get nothing easy.

The quarter-finals of this year’s King and Moffatt sponsored Junior A Football Championship continue on Saturday and Sunday.

St. Dominic’s are the first team into this year’s last four as goals from Ronan Morris and Derek Doyle helped them to a 2-6 to 0-10 victory against Roscommon Gaels in Strokestown on Friday evening.

They will meet either St. Brigid’s and Western Gaels who cross paths in Enfield on Sunday at 1 p.m. in what is a repeat of last year’s semi-final, which St. Brigid’s won comfortably.

There will be a big crowd in Ballyeague on Saturday at 4 p.m. for the meeting of Kilglass Gaels and St. Joseph’s, with the winners here meeting either Pádraig Pearses and St. Michael’s who will complete this weekend’s series of games in Rockfield on Sunday at 4 p.m..

*Check out next week’s Roscommon Herald for reports on all this weekend’s championship games.