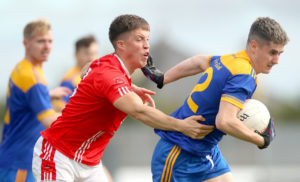 Clann prevailed by 0-14 to 0-10, thanks to a Man of the Match performance from Ciarán Lennon who kicked 0-7.

The Gaels were always in touch but late points from Cian McManus and Lennon gave Clann a 0-8 to 0-6 interval lead.

But the Gaels, who welcomed back Peter Gillooly and introduced former Roscommon player Mark Nally as a substitute, always kept in touch, and two points in a minute from Mark Healy and Brian Kelly (free) left just a point in it, 0-11 to 0-10, with six minutes remaining.

But a couple of points from Lennon and another from Ultan Harney got Clann over the line to set up a repeat of the 2015 final, which Clann won by a point.

Earlier in the day, St. Faithleach’s lost their way for 15 minutes of the second half against Castlerea St. Kevin’s, but they still comfortably reached this year’s intermediate football final against St. Dominic’s.

Walter Burke’s side prevailed by 2-18 to 1-10 but they went 21 minutes without a score, during which time Castlerea kicked 1-8 without reply to take themselves off the canvass.

A couple of Diarmuid Murtagh goals gave Faithleach’s a 2-7 to 0-2 interval lead but when Castlerea defender Andrew Callaghan pointed after 39 minutes — his side’s first score in 18 minutes — it signalled an avalanche of scored for Jason Reilly’s side.

They hit 1-8 without reply, the highlight being a cracking goal from full-forward Jonathan Hester.

But Faithleach’s steadied the ship, as Ciaráin Murtagh (2), David Rooney, Diarmuid Murtagh, Connell Kennelly and substitute Shane Phillips hit the last six points to set up a repeat of last year’s semi-final in the decider on Sunday, October 24th.

In the Junior A Football Championship quarter-finals, last year’s beaten finalists, St. Brigid’s will meet St. Dominic’s in the semi-final following a 2-15 to 2-9 victory against Western Gaels.

Pádraig Pearses will meet St. Joseph’s in the other semi-final after finishing strongly to edge out St. Michael’s 0-12 to 0-9 in Rockfield.

That result also means that St. Joseph’s will represent Roscommon in this year’s Connacht Junior A Football Championship next month as the sole first team remaining in the county championship.