The stakes were higher stakes than at any stage so far in the Roscommon adult football championships at the weekend, with four clubs contesting senior semi-finals, four clubs chasing berths in the intermediate decider, and eight sides eager to get their season back up and running at junior level. This week’s Roscommon Herald Paper will have reports on all eight games, and tomorrow we will present an amalgamated intermediate and junior team of the week – but for now, fresh off the back of two truly heavyweight contests in the Hyde, it’s the penultimate Roscommon Herald SFC team of the week selection!

Full reports and reaction from the two big games over the weekend are in this week’s Roscommon Herald sport, on a news stand near you tomorrow.

Three clean sheets between the four goalkeepers in action at the weekend, and Paul Whelan will quite reasonably argue that there wasn’t a lot he could have done about the two outstanding goals that went into his net. Daire McCormack added a 45 but misplaced a few kickouts, so Martin gets the nod on the basis of showing great positional sense to deny Conor Payne from a couple of half goal chances, as well as some very accurate restarts when his team was struggling to win primary possession.

Not his best game of the year, but Connaughton has set some incredibly high standards this year and he was hugely impressive once again yesterday. Aside from getting forward to finish a point, he was as tenacious as ever, very lively when Clann were carrying the ball out of defence, and just a real thorn in the Gaels’ side throughout the game. 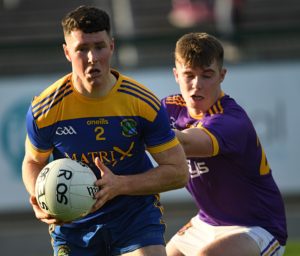 Getting beaten to a high ball by Ben O’Carroll for a key score late in the third quarter will haunt him, but otherwise it was another display of proper, old-fashioned full back play from Butler. He made a couple of huge blocks, most significantly one at the end when Brian Derwin shot for goal, and did his job as efficiently as ever.

Gleeson wasn’t named on the programme to start but he came in and did a very solid job over the hour, winning a couple of crucial turnovers and playing a key role in the huge tackle count that was built up by the Gaels over the hour.

Gavin won balls that he had no right to win, he threw himself into the play at both ends of the field, and generally kept up the incredible form that he has shown for club and county in 2021. John McManus was a little unlucky to lose out in this slot, and perhaps we’re judging the Garda by higher standards, based on his experience and his importance to the Gaels. Good, but not as good as the Gaels needed him to be, might be the verdict on his performance.

Of the four players that lined out at centre back at the start of the two games, two are going to get included – one higher up the pitch due to a second half-positional switch, and Daly, who was very strong on breaking ball and in terms of controlling a very important part of the field for Pearses. Shane Cunnane did pop up with a Hollywood score in the second half, but Daly can hardly be blamed for his man splitting the posts from the sideline, off the outside of the boot.

By some distance, Paul McGrath was St. Brigid’s best defender in this game, as he has been all year. Take Ben O’Carroll out of the equation, and he would have been the club’s best attacker on Saturday too. The number of crucial moments at each end of the field that were influenced by some vital intervention from the wing back were simply impossible to count, and while his sensational goal has no doubt featured regularly on your social media feed over the past few days, several of his last-ditch tackles were no less significant.

St. Brigid’s winning the midfield battle in the 2020 county final was a huge factor in the result of that game, and Niall Daly will know that. The landscape was very different on Saturday, as Eddie Nolan was clearly impeded by injury while neither Brian Stack nor Conor Daly made it to half-time. Through all that, the oldest Daly brother was a rock of dependability for the men in red, as might have been expected.

Pettit is not one of the glamour players in this Clann side, but he has stepped into the role of midfield general in a team that has lost Cathal Shine, and has done an incredibly good job all season. Roscommon Gaels tried to discommode Clann on McCormack’s kickouts by engaging in a baffling web of runs all over the field, but Pettit kept his focus and played a key role in winning the possession that the team needed, both in the air and in the tackle.

It wasn’t the free scoring tour de force of the quarter-final round, but this was still a really good bread-and-butter display from the wing forward dynamo, who must surely top the charts when it comes to GPS readings after the game. Not content with that, his use of the ball and his timing when it comes to joining the play is exemplary.

This is the nearest thing to a positional liberty we’re taking in this team, but it’s justified on the basis that while he lined out at centre back for the throw in, he pushed up as the game went on and was hugely involved in the type of high-energy, high-intensity game that Clann tried to play.

Another slight liberty in that he wore 12 but stood in the corner for the throw in – but to peg Payne as having played one position and one position only would be incredibly harsh on him. Despite making a handful of errors, he was ravenous for work and got his deserved  reward when he slotted three points in quick succession early in the second half. 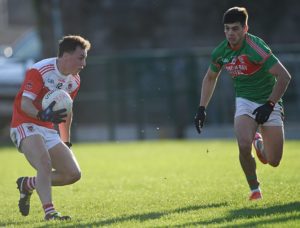 Not unlike Jack Connaughton and Paul McGrath at the other end of the field in this team, O’Carroll doesn’t quite have the stature of a typical intercounty player, but all three are making it impossible for Anthony Cunningham to ignore their claims for inclusion. His ability to create magical scores in the blink of an eye is a joy to watch and it’s a testament to his mentality that he has become the spiritual leader of this St. Brigid’s attack, even though he’s still a teenager.

First name on this team sheet, and undoubtedly the form forward in Roscommon right now. Detractors might highlight the fact that he is far more one-footed than you’d like at this level, but he’s not letting it show and is accumulating scores relentlessly. The narrative coming into the game is that if you shut out Ciarán Lennon, you can shut out Clann. That skips the rather significant matter of how do you shut him out? At the moment, it’s impossible.

Darcy continues to look more and more like the player that was central to the club’s success in 2019. Early in this championship campaign he was on a lot of ball, but not necessarily effective while doing so. Now he’s playing with real attacking intent, taking defenders out of the game and making the whole Pearses attack function better. His two second half frees showed real clutch mentality into the bargain.