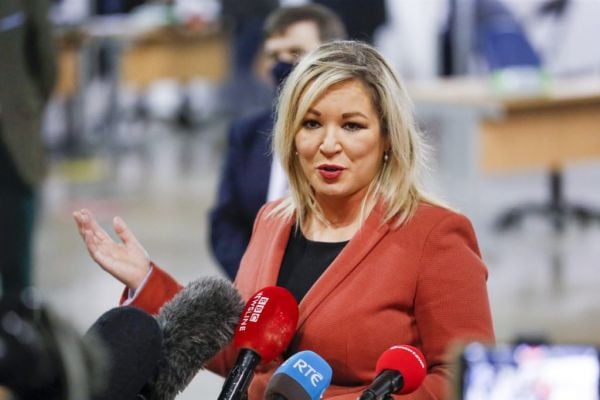 All of Sinn Féin’s MLAs have received the Covid-19 vaccine, Michelle O’Neill has said.

The North’s deputy First Minister was speaking on Wednesday after First Minister Paul Givan declined to say whether all the DUP MLAs have had the jab.

The matter was raised with both ministers at a meeting of the Executive Committee on Wednesday.

Chairman Colin McGrath contended that Mr Givan had got “very tetchy” on the matter in the Assembly on Monday.

“The public want to see leadership, they need to know that they can trust the Executive and when they see the First Minister getting so rattled in the chamber about vaccines and vaccine certificates, it’s really going to be very difficult for the public to have a great deal of faith in that,” he said.

Mr McGrath added that he was happy to say that he had taken the vaccine.

Ms O’Neill said it is the message to encourage everyone to take up the Covid-19 vaccine, describing it as “the difference between life and death”.

Mr Givan said on Monday that he has had both doses of the vaccine, but spoke against “trying to coerce people” as “counterproductive”.

He told the committee on Wednesday he echoed what Ms O’Neill said in terms of encouraging people to take up the vaccine.

“Indeed that is what I said in the Assembly chamber on Monday … I indicated very much that I wish people who hadn’t received the vaccine would do so, but the point that was being made is that we have a long established position where when it comes to people’s private health and medication and things that they would receive, that that exactly what it should be, it should be private,” he added.

Mr Givan described what happened in the Assembly on Monday “where a political colleague is demanding to know what other political colleagues have received or not whenever it comes to their own health care, I don’t think that is appropriate”.

Search carried out into reports of shots fired at Derry bonfire