It was a busy weekend for Roscommon Herald reporters, with four junior quarter-finals all played across the county, in addition to the senior and intermediate semi-finals at Dr. Hyde Park. On Monday we went through the senior Team of the Week, drawn from the outstanding contests between the four teams chasing the Fahey Cup. Today, it’s the turn of the intermediate and junior sides to make up an ‘All Star’ selection from the weekend’s action!

Remember, reports on all these games, along with full reports and reaction from the senior semi-finals and extensive build up to this Sunday’s county senior hurling final, can be found in this week’s Roscommon Herald, on sale right now.

There would be those who would argue that for both Clann na nGael goals, the 2006 All-Ireland minor winner should have stayed on his line – though chances are that would just have led to Callum O’Brien and Ross Naughton simply catching the ball and having an entire goal to shoot at from six metres out.

What can’t be denied is that Miley had to produce three stunning saves at various stages, and was up to the challenge each time.

Adam McDermott kicked two good points from play for Castlerea St. Kevin’s in the first half, but outside of this he wasn’t really a factor in the game – which is a testament to the incredible work of Murtagh as his man marker. He’ll have another huge challenge on his hands up against either Darren Donnelly or Conor Fallon next time out, but on this form, he’ll be a tough opponent for either St. Dominic’s player.

Defensive solidity and keeping the goals out was key for St. Dominic’s in their two-point junior championship win over Roscommon Gaels on Friday night. This group wouldn’t have been one of the more fancied sides coming into this championship but they’re picking up momentum now on the back of two tight wins and with players like Naughton keeping things controlled close to goal, they won’t be easy to break

Not unlike his brother Mark, who has been in tremendous form for the club’s seniors, Tom Richardson has been going about his business quietly but effectively, shutting down good corner forwards and giving his team a solid defensive platform. It’s not unreasonable to assume that if he was in any other club, he’d be playing senior football and holding his own easily while doing so.

The man whose twitter bio reads “fighting fitness since birth” has clearly come up with a peace treaty that works for all sides, as he’s simply flying up and down the flanks for the Kiltoom club. He didn’t get on the scoresheet on Sunday against Western Gaels, but it wasn’t for the want of energy and effort, as he was a huge factor in attack and defence. 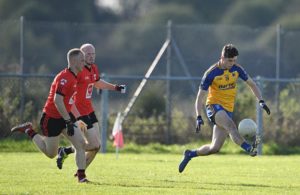 The game at Ballyleague that catapulted St. Joseph’s into the last four of the junior championship, and into “Europe” (aka Connacht club football) was a real game of two halves. The Kilteevan men did all their scoring in the first half, and had a seven-point lead to defend. They conceded just 0-5 after half-time in a stout defensive effort, which was led by Mannion at the heart of things. Kilglass were a threat close to goal where Ciarán McHugh in particular was capable of scores at any time, but the supply lines were scant, in no small part due to Mannion’s work.

We’ll give a shout out to Shane Keenan of Castlerea here, who was very much to the fore of St. Kevin’s second-half comeback against St. Faithleach’s, but O’Meara was very solid over the full hour and just about shades the decision. The man they call “the Bomber” was up and down the Hyde Park pitch and his likely match up with Mikey Dunne on Sunday week will be absolutely key to the outcome of the game.

Not for the first time in 2021, St. Faithleach’s found that winning primary possession at midfield didn’t come easy, and some of this is down to the fact that they are playing an all-round footballer like David Rooney in a midfield position, as opposed to a six foot four harvester of high ball.

Rooney’s form this year has been so good that he makes the trade off more than worthwhile. 0-5 in this fixture brings his total to 0-14 for the year, and in several games his contribution was the difference between winning and losing. Here, it was the difference between having enough scores banked to withstand Castlerea’s second half surge, and the team finding themselves in big trouble.

Jack Lohan put in a very impressive performance at midfield, particularly in the first half when there was still everything to play for. He found the going a bit tougher when Callum O’Brien moved out to the sector, with the Clann attacker picking off some nice high catches, but in possession Lohan was still hugely influential, creating time and space for himself in heavy traffic.

It would have been easy for Egan to have spent the week thinking about what might have been, given how close St. Dominic’s came to beating Tremane and what Tremane have gone on to achieve. Instead he has put his heart and soul into St. Joseph’s, and it showed on Saturday when he put in a livewire performance that was crowned with two excellent points.

On a day when three attackers carried the bulk of the scoring workload for St. Dominic’s, scoring 5-14 between them, all three deserve immense credit for their finishing – but Keenan’s game was about so much more. His passing and movement was the fulcrum of the St. Dominic’s attack, opening up the chances that allowed Darren Donnelly and Conor Fallon to make hay. After missing their last game against Kilbride, Keenan’s withdrawal after he pulled up with a knee injury midway through the second half will be a huge concern  for Tomás Gilleran and his management team.

Morris fired in a goal in the first minute and went on to dominate his club’s junior win over Roscommon Gaels with an effervescent display that saw him pop up all over the field, including a key role in his team’s vital second goal. This group are definitely in ‘bonus territory’ from here, but look for Morris to be a key part of their bid to go one step further this Saturday.

The discussion around Dr. Hyde Park on Saturday was if there is any player who has scored more in club football over the course of his career than the St. Dominic’s corner forward – and while the absence of records means it’ll be impossible to verify that one way or another, it’s highly unlikely that anyone has. 2-6 in total, 2-3 from play, would suggest that there’s plenty of life left in the 41-year-old yet too. 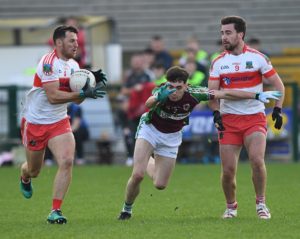 A lot of forwards would have been happy to just take the free in, if they found themselves in the situation Murtagh did early in the first half on Sunday. He was being pulled back, but instead opted to play on, drive at goal, and after his five second advantage expired, he placed a stunning low shot inside Killian Higgins’ near post.

Anyone who has ever played in the forwards will know what it’s like when you’re in form, and you know it – as he is right now.

Darren Donnelly, Mark Gilleran and Kealan Byrne can all consider themselves more than a little unlucky to miss out here in what was a really good set of games for inside forwards, but by a narrow margin, the vote goes to Henry, who couldn’t have done any more in his team’s cause. Pearses’ victory was almost entirely down to placing cover in front of Henry, while also cutting off the supply of ball – and even then, he was still the most dangerous player on the field.

Filed under: Roscommon IFC, Roscommon JFC, Team of the week

Pearses prevail at the second attempt

The Murray Cup is in Knockcroghery again – but who makes the IFC Team of the Year?

The Fahey Cup is in Strokestown – but who’s in the Roscommon Herald SFC Team of the Year?