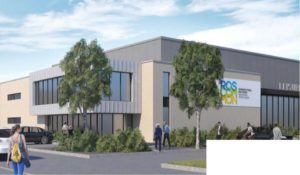 A drawing of the planned new sports facility for Roscommon.

There were mixed views expressed by councillors on strategic plans for the development of community sports and recreational facilities in Roscommon Town.

While members welcomed the broad thrust of the plan, some councillors expressed reservations over the absence of plans to develop a running track or other athletic-based facilities as part of the overall project.

The plan, based on a recent survey of sporting needs in Roscommon Town, was presented to members by Eamon Seydak of consultants,S3 Solutions. He said the main features of the plan would be a new, four-sport sports hall, multi-purpose studios, a floodlit 3G pitch, a grass pitch, and a perimeter trail for recreational walking, also enabling athletics training and cycling.

Consultations through a web-based survey, meetings with key stakeholders such as the local community and statutory and sporting organisations took place as well as site visits to a number of related facilities in the town. Overall, 42 different organisations contributed to the consultation process.

Mr Seydak said five potential sites had been identified, which are owned by the local authority or other statutory agencies. He said the preferred option was for lands currently under the ownership of the local Convent School and Roscommon County Council incorporating existing sporting facilities such as basketball and tennis courts, beside Roscommon Leisure Centre.

The new facilities would be run by an independent company, which would oversee the management of facilities, similar to the current structure governing the operation of the Roscommon Leisure Centre, whose management role would expand to cover the planned new facilities.

Mr Seydak said there would be “a small element of subvention required” in the early stages of the operation of facilities which would provide employment of 122 hours per week or 3.5 full-time positions. Initial projected revenues for the facility were estimated at up to €130,000 a year against a possible expenditure of up to €138,000.

He added that the cost of the project would be approximately €13m, subject to detailed design. The application for funding would be made under the government’s Large Scale Sport Infrastructure Fund (LSSIF) before the project proceeded to the procurement and design stage.