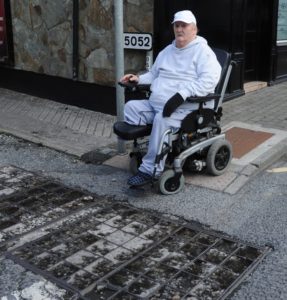 Thomas Hudson shows some of the challenges he faces trying to cross the road in Boyle. Pic. Mary Regan

A wheelchair user in Boyle has expressed his frustration over what he says are considerable issues over access in the town centre.

Thomas Hudson lives alone in the Plunkett Avenue area of the town. A native of Dublin, he has been using a wheelchair since March 2018 when complications with diabetes led to him having his leg amputated.

Living in Boyle for the past 20 years, he faces considerable obstacles in publicly accessing facilities in the town.

“There are a number of areas difficult to access a wheelchair,” he told the Roscommon Herald.

“For the likes of me, there is restricted access down at Shilling Hill on the Carrick-on-Shannon road. One is forced onto the road and past Cooney’s house to come back onto the footpath.

“From Shop Street going down to the church is also difficult. One has to come down Marian Road. There are no drop kerbs outside Creighton’s Pub, which makes it difficult to access local footpaths. At the corner of Green Street, there are road tiles missing.

“I do have a home help and get support for an hour-and-a- half a day, but access issues do restrict my ability to get around the town. Outside Callan’s Solicitors on The Crescent, there is a drop kerb which is three-and-a-half inches high, which is too high.

“The Carrick Road, out to Maple Drive, the footpath here is too narrow for a wheelchair user like me. These issues have been ongoing for the past three years. I’m asking the council to do something about these issues.”

Asked if he had contacted the Irish Wheelchair Association about his concerns, Thomas said he hadn’t but said he had been in touch with local public representatives on the issues. “I’m just looking for repair works to be carried out.

“These issues are affecting my quality of life. I believe there are funds there to get things done. There has been money for other footpath work in the town. 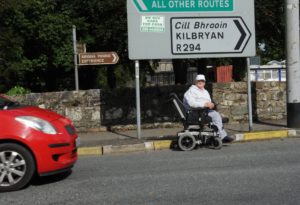 Living in Boyle for the past twenty years, Thomas says he faces considerable obstacles in publicly accessing facilities in the town. Pic. Mary Regan

“I never noticed these issues when I was driving and not using a wheelchair. The effect of it doesn’t bother you until you are faced with the issues. Now that I am a wheelchair user, it is an issue for me and others. Drop kerbs in the town are a particular issue for the likes of me,” says Thomas.

In response, Roscommon County Council confirmed that two of its officials met Thomas and went through a number of issues raised.

The council says that it has funding to address a number of them over the coming months, some are already in place and there is a planned programme of works.

“There are works ongoing in relation to footpaths on Green Street and we hope to continue with this contract taking the few issues Thomas has mentioned on board,” said a statement.