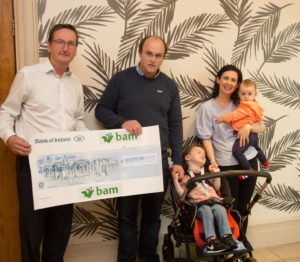 A trail walking day in the Slieve Bloom Mountains has raised over €10,000 for a brave Roscommon toddler.

BAM employees from around the country took to the hills to support the care of Aidan Kenny, a toddler who was diagnosed with a rare, incurable condition called Metachromatic Leukodystrophy (MLD) last year.

Three-year-old Aidan, from Cuileen, Creagh, in south Roscommon, requires around the clock care since his diagnosis in 2020. A GoFundMe appeal has been set up to allow his parents Séan and Deirdre and brother Darren to spend as much time with him as possible.

In May, Aidan received the Young Engineers Award in honour of his curious mind and bravery. Engineers Ireland awarded him this through the STEPS programme as an individual award, the first of its kind, making him the youngest engineer in Ireland.

Established in 1958, BAM, one of the largest multinational construction businesses operating nationally, took on the fundraising challenge. BAM director Denis McCarthy commented: “It was great to see so many of our colleagues come to support and raise awareness for such a worthy cause. Aidan, Séan, Deirdre, and Darren are handling this situation with great courage, and we are proud to be associated with people of such strength and character. We know that the funds raised will be put to good use as the Kenny family continue on their journey.”

In January of this year, the Kenny family received the heartbreaking diagnosis that Aidan is suffering from a very rare, incurable condition called Metachromatic Leukodystrophy (MLD).

Agonisingly, Sean and Deirdre have watched their son’s condition deteriorate rapidly in recent months and now provide Aidan with 24-hour care and assistance.

Since his diagnosis just a few short months ago, Aidan has lost the ability to move, speak,and swallow. He needs to be tube-fed, but the brave little boy battles on with a smile.

It is expected that Aidan will go on to lose his sight, hearing, and much of his cognitive ability. The life expectancy for an MLD sufferer is between five and 10 years old.

The family embarked on this very difficult journey in August last year when they noticed that their little boy had difficulty walking. Suspected cerebral palsy was ruled out but subsequent scans and tests confirmed the worst fears of the family:, Aidan had this rare, incurable, and life-limiting condition.

Aidan’s father Sean works as an engineer while his wife Deirdre, a Ballygar native, is a primary school teacher at Athleague NS. They are very grateful for the support of family, friends, and colleagues during this incredibly difficult time. There is sadly no cure for Aidan’s condition, but his family are doing everything in their power to make sure that he smiles through the years left in his journey. The level of care that Aidan requires limits Seán and Deirdre’s ability to work at this time. Despite the valuable support they have received from the HSE, Roscommon Early Intervention Service (RISE) and the Jack and Jill Foundation, a lot more resources are required to help Aidan make the best of his days.

Friends and family have come together to fundraise to help the Kenny family with their costs so that they can continue to give their precious boy the time and care he so deserves.

More information on All for Aidan, including how to donate, can be found at https://ie.gofundme.com/f/all-for-aidan