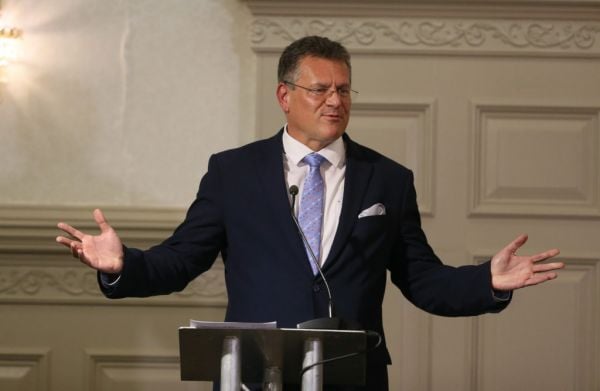 The UK government has said it is “ready to work hard” to safeguard peace in Northern Ireland, after the European Union announced proposals to cut red tape in trade across the Irish Sea.

EU Commission vice president Maros Sefcovic unveiled on Wednesday a series of measures that would slash regulatory checks and dramatically cut customs processes on the movement of goods between Britain and the island of Ireland.

The UK government has called for “intensive talks” to follow the EU’s proposals, which are designed to tackle disruption caused by the protocol.

The measures would see an 80 per cent reduction in checks envisaged for retail agri-food products arriving in Northern Ireland from Great Britain.

The proposed changes also remove the prospect of certain British produce, including Cumberland sausages, being banned from export to the region.

The protocol, which was agreed by the EU and UK to maintain a free-flowing land border on the island of Ireland, has created a series of economic barriers on the movement of goods from Britain to Northern Ireland.

The EU plan to ease the resultant trade friction also includes a 50 per cent reduction in customs paperwork required to move products into the North from Britain.

More products and companies would be exempt from customs tariffs as a result of expanding trusted trader arrangements and a concept that differentiates between goods destined for Northern Ireland and those “at risk” of onward transportation into the Irish Republic.

The EU has also offered to legislate to ensure no disruption to the supply line of medicines from Britain to Northern Ireland.

After the proposals were announced, a UK government spokesperson said: “The EU have now published their proposals in response to those in our Command Paper.

“We are studying the detail and will of course look at them seriously and constructively.

“The next step should be intensive talks on both our sets of proposals, rapidly conducted, to determine whether there is common ground to find a solution.

“Significant changes which tackle the fundamental issues at the heart of the protocol, including governance, must be made if we are to agree a durable settlement which commands support in Northern Ireland.

“We need to find a solution which all sides can get behind for the future, which safeguards the Belfast (Good Friday) Agreement, and which puts the UK-EU relationship on a stronger footing.

“We are ready to work hard with this in mind.”

Mr Sefcovic said the bloc had put in a lot of hard work to come up with an “alternative model” for implementing the protocol.

“We have explored every possible angle of the protocol and, at times, went beyond current EU law,” he told a press conference in Brussels.

He added: “With this robust package of practical, imaginative solutions we can continue to implement the protocol on Ireland/Northern Ireland for the benefit of all communities on the ground.

“It not only cements stability and predictability, an indispensable ingredient for the local economy to flourish, but also paves the way for enhanced opportunities.”

As part of its proposals, the commission has also pledged to enhance engagement with stakeholders in the North, including politicians, business representatives and other members of civic society.

However, the measures contained in four separate papers published by the bloc on Wednesday evening do not offer any concession on a key UK government demand, the removal of the oversight role for the European Court of Justice (ECJ).

In return for the scaled-back checking regime, the EU has asked for certain safeguards to be implemented to provide extra assurances that products said to be destined for the North do not end up crossing the Irish border.

Those include labelling of certain products, making clear they are for sale in the UK only, and enhanced monitoring of supply chain movements and access to real time trade flow information.

It said access to the real time data, and the construction of new checking facilities at ports in Northern Ireland, were commitments the UK had already made but was yet to deliver on.

The full extent of checks required under the protocol has yet to be applied due to the continuation of a series of grace periods that the UK has unilaterally extended on an indefinite basis.

The EU’s pledge on agri-food checks refers to an 80 per cent cut in the number that would be required under full implementation of the arrangements, though the proposal would also lead to a reduction in checks currently applied during the grace periods.

While the range of measures would go some way to reducing everyday friction on trade caused by the protocol, they do not address the UK demand over the role of the ECJ.

UK Brexit minister Lord Frost has made clear the removal of the court’s oversight function in policing the protocol is a red line for the Government if a compromise deal is to be struck.

Under the terms of the protocol, which was agreed by the UK and EU as part of the 2020 Withdrawal Agreement, the ECJ would be the final arbitrator in any future trade dispute between the two parties on the operation of the protocol.

The UK now wants to remove that provision and replace it with an independent arbitration process.

The European Commission has insisted it will not move on the ECJ issue.

It has pointed out that Northern Ireland would be unable to retain unfettered single market access, a key provision of the protocol, if the arrangement is not subject to oversight by European judges.

Lord Frost has warned that the UK could move to suspend parts of the protocol, by triggering the Article 16 mechanism, if an acceptable compromise cannot be reached.

The EU plan amounts to a set of counterproposals in response to a wish list of protocol reforms outlined by the UK government in July.

The proposals from both sides are now set to form the basis of a new round of negotiations between Brussels and London in the weeks ahead.

Earlier on Wednesday, Lord Frost insisted the reach of the ECJ was a key issue.

“The problem with the protocol at the moment is that EU law, with the ECJ as the enforcer of it, is applied in Northern Ireland without any sort of democratic process,” he told broadcasters.

“So that, I think, has to change if we’re to find governance arrangements that people can live with.”

Mr Martin added that the European Commission had “demonstrated imagination, innovation, and also a listening ear to the people who matter, the people in Northern Ireland who are on the ground dealing with these issues”.

However, he said that on first inspection they would appear to “fall far short of the fundamental change needed”.

“I think that demonstrates both in word and deed that the EU side are living up to their commitments that they made to both business and civic leaders as well as political leaders,” she said.

The protocol was agreed by the UK and EU as a way to sidestep the major obstacle in the Brexit divorce talks, the Irish border.

It achieved that by shifting regulatory and customs checks and processes to the Irish Sea.

The arrangements have created new economic barriers on goods moving from Britain to Northern Ireland.

This has caused disruption to many businesses in Northern Ireland and has also created a major political headache for the UK government, as unionists and loyalists are furious at what they perceive as a weakening of the Union.

However, other businesses have benefited from the terms of the protocol, which provides Northern Ireland traders unique unfettered access to sell within the UK internal market and EU single market.