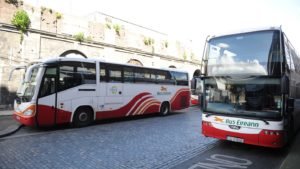 Plans to roll out a fully electric bus service in Athlone by the end of the year have been welcomed this week. The announcement was made as part of Budget 2022, which commits to supporting a wide range of sustainability projects. In total, €3.4 billion will be allocated to the Department of Transport, including €1.8 billion for greener, cleaner transport.

“This year’s budget supports our goal of achieving cleaner, greener transport by 2030. I was delighted to see confirmation that Athlone will have a fully-electric town bus service by the end of the year. Bus Éireann has previously said it will use the town to pilot the wider rollout of electric buses. This is a fantastic opportunity for Athlone to demonstrate the benefits of sustainable transport, such as lower emissions and cleaner air, and change the mind-set around transport. I hope this initiative will assist in bringing more electric busses to other towns and cities right around the country.”

MEP Markey also welcomed the commitment to invest €360 million per year to support walking and cycling projects nationwide including €60m for greenways and the roll out of the Safe Routes to School Programme.

“I was thrilled to see the new Greenway Bridge for Athlone included in Budget 2022. The bridge is a major boost for the town and a vital part of the coast-to-coast Galway to Dublin Greenway. It will be a fantastic piece of infrastructure for local walkers and cyclists and will bring more tourists into the area which will benefit the wider local economy.”