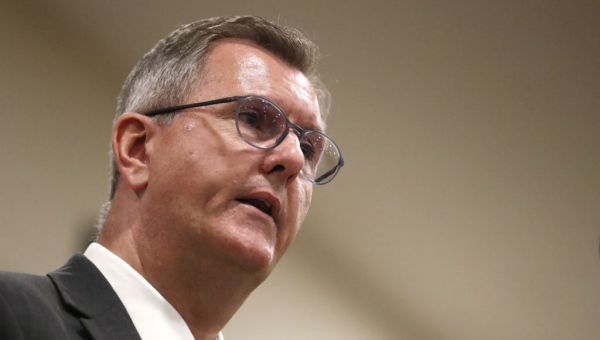 Sir Jeffrey was speaking after a virtual meeting with Mr Sefcovic on Thursday.

It followed the release of the EU’s plan to alter the protocol by reducing post-Brexit checks on goods and medicines arriving into Northern Ireland from Britain.

The protocol, which was agreed by the EU and UK to maintain a free-flowing land border on the island of Ireland, has created a series of economic barriers on the movement of goods from Great Britain to Northern Ireland.

Unionists oppose the protocol, which they believe has driven a wedge between Northern Ireland and the rest of the UK.

Speaking after his meeting with Mr Sefcovic, Mr Donaldson said: “We had a useful and honest discussion. I welcomed the change of heart in Brussels with the decision to renegotiate.

“For so long we were told the protocol could not be reopened but the persistent pressing of our case has paid dividends.

“I also explained why the proposals fall short of what is needed.

“These negotiations must not be a missed opportunity. There is a window to get this right. To get a deal which can allow Northern Ireland to, once again, get moving forward.”

Mr Donaldson added: “Short-term fixes will not solve the problems that have beset the United Kingdom internal market.

“Removing some checks today does not solve the divergence problems of tomorrow. State aid and VAT arrangements if left unaltered will be detrimental to Northern Ireland’s long-term prospects.

“We need a sustainable solution which removes the Irish Sea border and restores our place within the United Kingdom.”