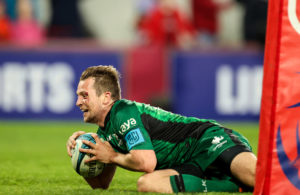 Jack Carty was Man of the Match, despite Connacht’s heart-breaking defeat against Munster in the United Rugby Championship at Thomond Park this evening.

The former Roscommon minor footballer contributed 13 points to his side’s courageous performance, including an opportunist try, as Andy Friend’s charges lost out 20-18 to their southern rivals.

Connacht produced their best performance of the season and were ahead entering the last couple of minutes, but, following a sustained period of Munster pressure, Diarmuid Barron barged over the line, and Joey Carbery converted to hand his side a dramatic victory.

Afterwards, Carty admitted that his side were “gutted” to lose but that they had set the bar for what standard was needed in future performances, starting against Ulster next weekend.

Regardless, Carty’s excellent performance will give Ireland Head Coach Andy Farrell something to think about ahead of November’s internationals against Japan, New Zealand and Argentina.