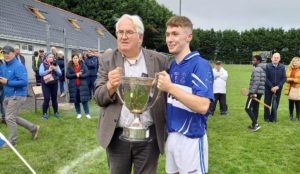 Athleague are celebrating a famous county senior hurling championship triumph after a storming second-half performance saw them get the better of parish rivals Tremane by 3-12 to 0-15 this afternoon.

Goals from Eoin Ward and Cormac Kelly kept Padraig Mannion’s side in the hunt early on as Tremane, inspired by dual star Niall Kilroy, took a 0-10 to 2-3 lead into the interval.

Tremane edged two points in front, thanks to a couple of Kilroy frees, after 36 minutes but when Robbie Fallon scored Athleague’s third goal a minute later, it was all to play for once more.

The sending off of Athleague defender Alan Moore turned out to be the game’s pivotal moment. Instead of handing the initiative to Tremane, however, Athleague showed all their experience gleaned from their last three final appearances by taking control of the contest.

Inspired by Ronan O’Meara and Aengus Lyons, they completely dominated the remainder of the game, frustrating the Tremane forwards, and hitting them with killer scores on the counter-attack.

In the end, Tremane placed too much responsibility on Kilroy’s shoulders, as Athleague captain Ben McGahon landed a sideline cut, which was followed by insurances scores from Lyons, McGahon and a brace from substitute Cian Murray.

It was Athleague’s first triumph since 2018 and the club’s 20th overall, and it’s a success that will surely rank up there with one of the sweetest in the club’s proud history.