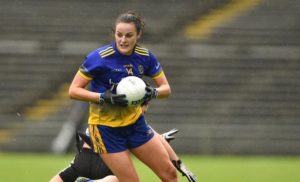 Clann na nGael will become the latest team to try and break Kilbride’s stranglehold on the senior ladies’ football championship after both sides came through their respective semi-finals earlier today.

Kilbride kept their hopes for six titles in succession alive with a hard-earned 3-13 to 1-14 victory against St. Brigid’s in Kiltoom.

Fiona Tully and Sarah O’Rourke swapped early goals but Kilbride, aided by a couple of Aisling Hanly scores, nudged ahead, 1-7 to 1-6, by the interval.

With the scores tied at 1-9 apiece, Tully, who was Player of the Match, pounced for her side’s second goal following a good run, and a third goal from Corona Gormley cemented her side’s place in another final in two weeks’ time.

Meanwhile, Clann na nGael swatted Shannon Gaels aside with ease in Johnstown as goals from Jenny Higgins, captain Ruth Finlass and Caoimhe Lennon guided the home side to a comfortable 3-11 to 1-3 triumph.

The writing was on the wall for the visitors after only 20 seconds when Higgins goaled straight from the throw-in, and that set the tone for Finbar Egan’s side to dominate the remainder of the match as they built up a commanding 1-6 to 0-1 lead at half time.

Finlass sent an unstoppable shot to the back of the net on the resumption as Clann continued to overpower their North Roscommon opponents. There was still time for Lennon to grab a third goal, and while Shannon Gaels full-forward Aisling McDermott scored a consolation goal for her side, it failed to take the bleak look off the scoreboard.