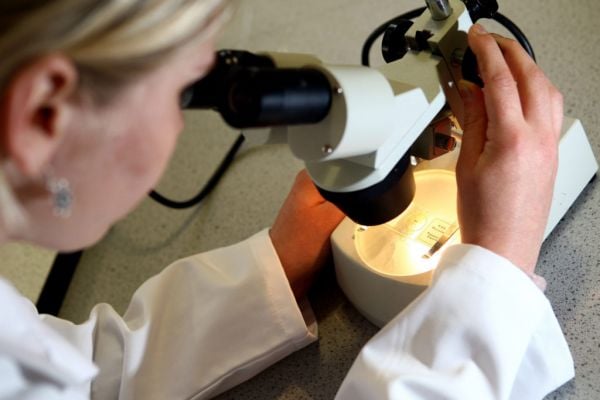 Revenues at one of the lab firms at the centre of the CervicalCheck programme scandal increased by 40 per cent to €12.95m in the 12 months after the scandal first came to light.

Currently, the Dublin based Medlab Pathology Ltd is being sued in the High Court by a number of women concerning alleged failings in the HSE’s CervicalCheck programme.

Solicitor in the landmark Vicky Phelan case, Cian O’Carroll said on Monday that ‘a substantial number’ of cases being taken by his firm relating to the CervicalCheck scandal concern Medlab Pathology where they appear as co-defendants with the HSE.

The accounts confirm that Medlab Pathology Ltd no longer trades.

The €2.5m High Court settlement with Clinical Pathology Laboratories, a sister lab of MedLab concerning Vicky Phelan occurred in April 2018 and revenues for Medlab Pathology Ltd increased by 40 per cent from €9.23m to €12.9m in the 12 months to the end of June 2019.

The directors stated: “The year from July 1st 2018 to June 30th 2019 represented continued development and investment in this market. The directors were satisfied with the progress made in this respect bearing in mind the economic climate that existed in Ireland.”

Referring to the ongoing legal claims involving the company in the new accounts, a note states that “the company has insurance to cover these types of claims”.

The note states that the company “should only be exposed to the deductible amounts under the relevant policies and certain legal fees, unless the policy limits are exceeded or a claim is denied”.

The note adds that €594,043 of relevant costs have been incurred since balance sheet in relation to claims that have arisen after the balance sheet date which have been settled or dismissed prior to the date of signing these financial statements.

Mr O’Carroll said on Monday that Medlab Pathology “have generally been defending quite strongly” the claims against it “but we haven’t failed in any action yet”.

Higher costs in the 12 months to the end of June 2019 resulted in pre-tax profits at Medlab Pathology Ltd almost halving to €59,305.

However, the sale won’t impact on the court actions against Medlab as Sonic Healthcare has retained all of Medlab’s contingent liabilities.

The directors confirm that on February 8th this year, Medlab Pathology received a capital contribution of €7.4m from its parent company.

The HSE has previously stated that it paid MedLab €5.84m to process Cervical Check results for 2017 and 2016.