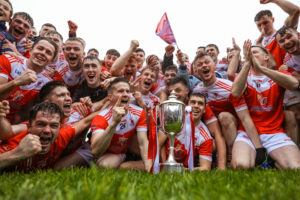 The 2019 champions deservedly got the better of neighbours Clann na nGael by 2-8 to 0-11 but, in truth, the gulf in class between the sides was much wider.

The first half was a cagey affair, not helped by the worsening weather conditions. Pearses led by 0-4 to 0-3 at the break, having hit their four points in the first 11 minutes through Niall Daly, Paul Carey (free), Hubert Darcy and Conor Daly.

Two frees and a point from play by Ciarán Lennon accounted for Clann’s first-half scores.

The second half was a fine advertisement for club football in the county as both teams threw off the shackles.

Ironically, Pearses struck their first decisive blow after Clann had drawn level through Lennon (free) and Cathal Duignan. Carey fastened himself to a quick free by Hubert Darcy before rounding Fearghal Lennon and Paddy Gavin, who both slipped, and slammed the ball into the net.

To Clann’s credit, they kept plugging away but the goal they probably needed never looked coming. Instead it was Pearses who grabbed the match-defining goal when a superb team move was finished to the net by substitute Jack Tumulty to copperfasten their side’s place in the annals of Roscommon GAA folklore.

Niall Daly was picked as Player of the Match after another hugely consistent performance as joint captains Emmett Kelly and David Murray lifted the Fahey Cup.