Roscommon referee shows off his silken soccer skills before throw-in 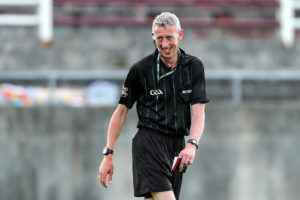 The performance of referee Patrick McTiernan during Sunday’s county senior football final between Pádraig Pearses and Clann na nGael has been widely praised on what was a difficult day for football in the Hyde.

However, the St. Ronan’s official showed no sign of nerves on the big day as footage on social media has emerged of him displaying his silken soccer skills, that Ronaldo or Messi would be proud of, just before he threw in the ball.

McTiernan, who refereed the Connacht minor football final between Mayo and Galway in 2019, was an ace marksman for St. Ronan’s at full-forward during his playing days with a cultured left boot that kept scoreboard operators across the county busy on big championship occasions.

Like all good players, confidence and being relaxed was the key, traits McTiernan didn’t lack on Sunday as he enhanced his reputation as one of the county’s top officials.