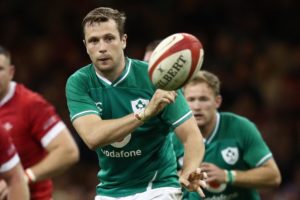 Connacht out-half Jack Carty is back in the Irish rugby squad.

Connacht out-half Jack Carty has been recalled to the Irish rugby squad for this Sunday’s final Autumn Nations Series tie against Argentina at the Aviva Stadium.

The Roscommon man replaces Johnny Sexton who suffered a twisted knee and ankle during Saturday’s historic 29-20 victory against New Zealand.

Carty won the last of his ten caps against Russia in the 2019 World Cup. With Joey Carbery expected to start Sunday’s match against Los Pumas, Carty will be vying with Harry Byrne for a place in the match-day squad.

Carty has been in brilliant form for Connacht this season.