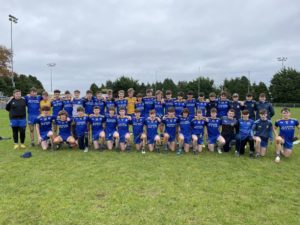 The Marist College team that overcame St. Mary’s of Edenderry at Kiltoom this afternoon.

A strong wind blew down the ground in Kiltoom for the Marist vs St. Mary’s contest, favouring the Offaly school in the opening half. Conor Hand, playing on his home club ground, was among the early scorers for the Marist as the first four points of the game were equally shared, but St. Mary’s took control from there and led by 0-11 to 0-4 at half-time, extending that out to 0-13 to 0-4 with two points early in the second half.

Senan Baker, son of former Clare hurler Ollie Baker, got the comeback underway with a free in the 39th minute and the Marist exploded into life from there, kicking five points in a row. Paddy Higgins, another St. Brigid’s player, then intercepted a short kickout and set up Baker for the game’s first goal, and when Tom Kelleher and Baker followed up with long range points, Marist were now a point up going into the water break.

The final quarter was a tighter affair but Marist kept their noses in front before a second goal from Baker in the 58th minute confirmed their win.

All bar one of the Athlone Community College students that lined out in their home school field against St. Pat’s were from Roscommon clubs, and St. Brigid’s players were again to the fore as they took the fight to their highly-rated opposition. Daniel Keenan shot three points in the first half, later adding three more in the second, with his club colleague Oisín Canny and Jason Mulvey (Clann na nGael) adding two points each in what was a fiercely competitive opening 30 minutes. A controversial penalty goal meant that St. Pat’s took a 1-7 to 0-7 lead into the interval, and they kicked on gradually over the course of the second half of the game.

The Brigid’s duo of Ronan Doyle and Harry Griselain along the spine of the defence, as well as Clann’s Oisín O’Flaherty at midfield, all showed up well for ACC, who now face a do-or-die game against reigning champions St. Joseph’s of Rochfortbridge on Friday week.