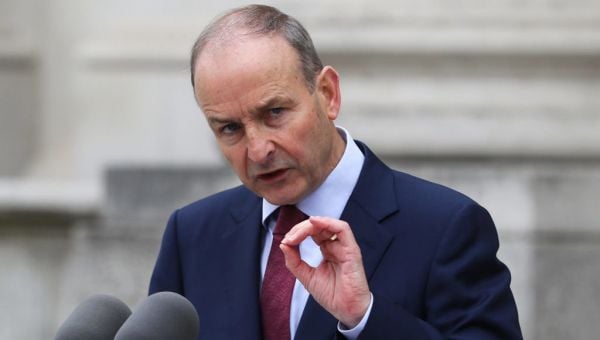 Taoiseach Micheál Martin said the UK and EU need to “knuckle down” and resolve the dispute over Northern Ireland’s post-Brexit arrangements.

UK Brexit minister Lord Frost will hold further talks with European Commission vice-president Maros Sefcovic on Friday, with the UK still warning that it could unilaterally suspend parts of the Northern Ireland deal unless major changes are made.

But Mr Martin said he was encouraged that progress is being made and the “mood music” has changed.

For clarity, I have set out my and the Government’s position on our negotiations with the EU over the Northern Ireland Protocol in the @UKHouseofLords this morning. pic.twitter.com/s062DD26S9

In a BBC interview, Mr Martin cautioned the UK against taking the step of triggering Article 16 of the Northern Ireland Protocol, the step which would suspend parts of the arrangements.

The protocol was put in place to prevent a hard border with Ireland by effectively keeping Northern Ireland in the EU’s single market for goods, but that meant checks on products crossing the Irish Sea from Great Britain.

Mr Martin said the European Commission had put forward a “comprehensive package of measures” to address the concerns raised about the protocol, adding that some EU members thought Mr Sefcovic had gone “too far” in the concessions he had offered to reduce checks.

He said he believed serious talks were taking place between the UK and EU and “where there is a will, there is a way, and I think both sides just need to knuckle down and get it resolved”.

Negotiations on the Brexit trade deal a year ago stretched until December 24th and Mr Martin said “don’t leave it to Christmas Eve this year”.

Asked whether he could trust Boris Johnson, the Taoiseach said “I get on well with Boris Johnson on a personal level”.

On Thursday, Lord Frost told his fellow peers that the option of using Article 16 remained on the table despite speculation a deal was within reach.

Mr Martin said “my own view is that unilateralism never works” and using Article 16 would have a “very negative” impact.

In Parliament, Lord Frost said Brussels should not interpret his “reasonable tone” in talks to imply any softening of the UK’s position and Article 16 is still “very much on the table”.

He told the House of Lords: “Whatever messages to the contrary the EU think they have heard or read, our position has not changed.”

Lord Frost said an agreement is the best way forward but “I would not recommend any outcome from the negotiations that I did not believe safeguarded political, economic or social stability in Northern Ireland”.

While Lord Frost and Mr Sefcovic meet in Brussels, Mr Martin will join leaders and ministers from across the UK and Ireland in Cardiff for a session of the British-Irish Council.

Welsh first minister Mark Drakeford said it was a “timely opportunity to support dialogue and collective action between our governments, and this is more essential than ever given the current challenges we all face”.

Meanwhile, Lord Frost claimed the UK was “maximising the opportunities of Brexit” with Teesside Freeport beginning its operations.

“Having left the European Union we now have the freedom to do things differently, including setting up new free ports to turbocharge our trade with the world’s fastest growing markets,” he said.