WARNING: The following pictures are of a graphic nature and may cause distress.

An animal charity is asking the public for information following the gruesome discovery of animal carcasses in a bog in the county.

According to the Athlone branch of Animal Haven Ireland, a dead sheep, a white calf, and a decomposed fox, as well as lots of decomposing deer carcasses, were found dumped on the Glosh bog near the South Roscommon/ East Galway border.

The charity said that the sheep and calf had their heads cut off so they could not be identified. The charity believes that the animals were shot by poachers hunting for deer in the middle of the night.

They said that both the Gardaí and the National Parks and Wildlife Service have been notified of this “appalling incident”.

They warned that carcasses pose a significant health risk to the environment and farm animals. 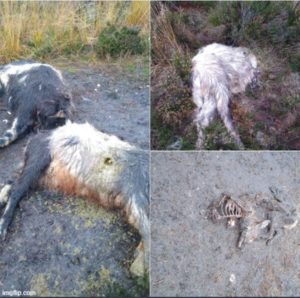 The remains were found on the Roscommon Galway border.