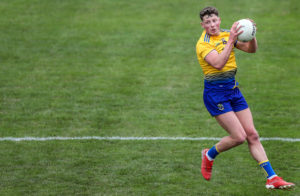 Conor Cox and his Roscommon team-mates will play in Division Two next season.

The Roscommon senior footballers’ new season is taking shape after a draft of next season’s league fixtures was sent to individual counties for consideration last week.

While the GAA has yet to confirm next season’s schedule of games and counties are not revealing details of last week’s draft fixtures, it appears that Anthony Cunningham’s men will enjoy four home games in Division Two.

The Roscommon Herald understands that Roscommon will play Cork, Clare, Derry and Galway in Dr. Hyde Park, while they will be on the road to face Meath, Down and Offaly.

It is understood that Roscommon will open their campaign at home to Cork in the Hyde, in what will be new Rebels manager Keith Ricken’s first game in charge, on Sunday, January 30th.

The GAA has also confirmed that pre-season competitions will return next season, meaning that Roscommon will compete in the FBD Connacht League before their Division Two League season commences.