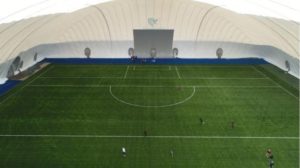 The Connacht GAA Dome will host games in the 2022 Connacht Senior Football League.

Sligo and Leitrim will make history on Tuesday, January 4th, 2022, by becoming the first two teams to be involved in a competitive intercounty GAA match in the Dome. The game will mark Ballaghaderreen player Andy Moran’s first game in charge of Leitrim.

The winners of that game will play Roscommon in the last four, in what will be Anthony Cunningham’s side’s first competitive game of the new season, on Saturday, January 8th.

Mayo and Galway are scheduled to meet in the other semi-final on Friday, January 7th, in the CEO Dome.

The final, for the Paddy Francis Dwyer Cup, who was a former Roscommon GAA Secretary, will take place on Friday, January 14th.

Meanwhile, the fixtures for the 2022 Connacht Minor Football Championship have also been released.

James Duignan’s side will get their campaign underway on April 22nd against Galway (away). Roscommon will host Mayo on April 29th before travelling to Leitrim on May 6th. The Rossies will conclude their group stages against Sligo (away) on May 20th.

The semi-finals are scheduled for May 27th, with the A and B finals down for decision on June 3rd.

The draw for the Connacht U-20 Football Championship has yet to be made, although the dates for next year’s fixtures have been confirmed.