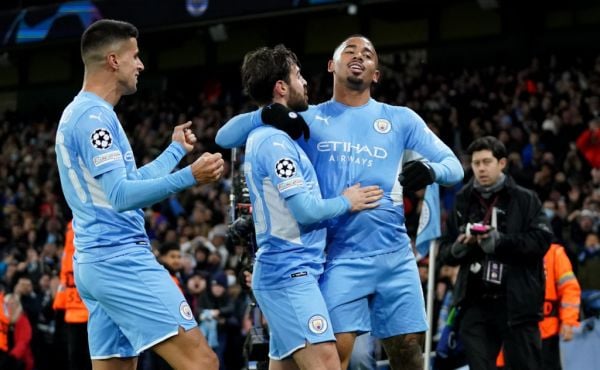 Raheem Sterling and Gabriel Jesus struck as Manchester City came from behind to sink Paris St Germain 2-1 and reach the Champions League last 16.

The Premier League champions produced a superb response after falling behind to a goal from Kylian Mbappe against the run of play early in the second half at the Etihad Stadium.

Sterling levelled just after the hour and substitute Jesus popped up to claim a winner 14 minutes from time that also confirmed City as winners of Group A.

It was a disappointing night in Manchester for PSG boss Mauricio Pochettino in a week that has seen him heavily linked with the managerial vacancy across the city at United.

Yet City’s victory was thoroughly deserved as, despite lacking three of their most inventive players in Kevin De Bruyne, Jack Grealish and Phil Foden, they produced an energetic and dominant display.

There was still some consolation for PSG, however, with Leipzig’s victory over Club Brugge meaning the French side would still go through.

City had early opportunities when Rodri’s powerful header was cleared off the line by Presnel Kimpembe and Riyad Mahrez fired into the side-netting.

Mahrez went even closer with a curling effort that looked destined for the top corner but Achraf Hakimi did brilliantly to get back and divert the ball over the crossbar.

Ander Herrera almost turned the ball into his own net as he stretched to intercept a Bernardo Silva cross but Keylor Navas saved, as he did again shortly afterwards to keep out another Mahrez attempt.

As the first half drew to a close, City were completely dominant and at their fluid best but the ball would still not go in. Ilkay Gundogan hit a post, although a flag suggested it may not have counted.

PSG were restricted to occasional counter-attacks but Neymar and Nuno Mendes both failed to get any power behind shots.

Mbappe, who overcame a fitness test to start, had their clearest chance but leant back and blazed over after being played through by Neymar.

The World Cup-winning striker made amends for that miss five minutes into the second half as the visitors suddenly burst into life.

Messi and Neymar were both involved in a slick attack but a deflection off a City defender presented Mbappe with a chance he did not waste, firing through Ederson’s legs.

PSG immediately went looking for more but Ruben Dias blocked from Messi and another promising attack was also snuffed out.

City manager Pep Guardiola responded by sending on Jesus for Oleksandr Zinchenko and the hosts were soon back in the ascendancy with Navas sticking out a glove to deny Mahrez.

Pressure paid off just after the hour as Rodri’s deep cross into the box was cut back by Kyle Walker and Sterling poked home after a deflection off Jesus.

City made them pay for that miss by claiming the lead 14 minutes from time.

Mahrez picked out Silva with a deep ball into the box and the Portuguese neatly laid off for Jesus to turn home first time.

It was enough to ensure City, last season’s runners-up, will be in the knockout stages for a ninth successive year.