Easier to get a Garth Brooks ticket than a PCR test, Dáil hears 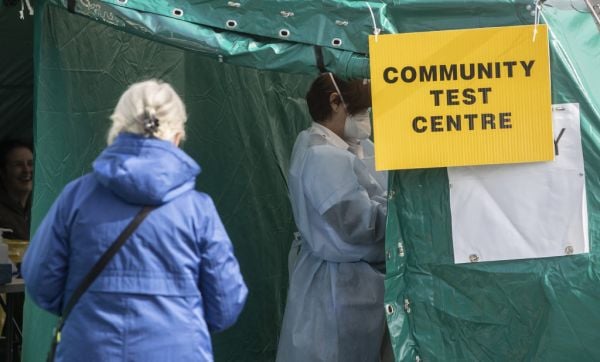 Buying a ticket to see Garth Brooks is easier than booking an appointment for a Covid-19 test, the Dáil has been told.

Sinn Féin’s Pearse Doherty said it has been “impossible” to book a PCR test in most counties as demand soared in recent weeks.

The HSE’s self-referral portal shows no availability in almost 20 counties.

Mr Doherty said some people have offered to swap concert tickets for a PCR test.

“I’m sure we’ve all seen the comments on social media, the bit of banter about how it’s easier to get Garth Brooks tickets in the state than it is to get a PCR test,” Mr Doherty told the Dáil

“Others are posting that they’ve got Garth Brooks tickets and are willing to swap for a PCR slot.

“While that might be a bit of light banter, the reality is very, very serious.

“It’s impossible to book a PCR test in most of this state.

The crisis in our hospitals didn’t happen overnight, and the failure by the Government to build-up ICU capacity over the last two years is simply inexcusable.

“Not a slot to be got for love nor money.”

The Government has faced mounting criticism over delays in accessing appointments, with people forced to wait days or travel long distances for an appointment.

The HSE has the capacity to carry out more than 30,000 tests a day.

Tánaiste Leo Varadkar said there has been an “extremely high and sustained” demand for tests in recent weeks, compounded by people suffering other respiratory illnesses.

“It is necessary for us to prioritise and to adjust testing criteria in order to prioritise those most in need of a test,” he added.

“The system is operating in excess of surge capacity.”

We are recruiting community swabbers for COVID-19 testing teams. Full training will be provided to carry out the role. Click on the link to apply ➡ https://t.co/FXFnOuVoZI pic.twitter.com/7rDghQkBTt

Mr Doherty said the delay in accessing appointments is a result of a Government failure to plan for a surge.

“We see GP services overwhelmed. We see schools that are struggling, we still don’t have a plan from Government in relation to making an antigen test free or even subsidised,” the Donegal TD added.

“Nearly two years into this pandemic, we have a system that needs to be equipped to cope with higher levels of transmission.

“When we reopened our economy there was always going to be a chance of higher transmission, and therefore plans needed to be put in place and plans need to be executed, but the Government has failed and failed drastically in this matter.”

Mr Varadkar said priority for tests has been given to people where a GP said a test is warranted, and those who are deemed as a close contact and are symptomatic.

“Ensuring these two groups are prioritised doesn’t mean the test spots may not be available on the booking portal at a particular point in time, however it is important to say that the system is constantly monitored, and extra appointments are added throughout the day,” he said.