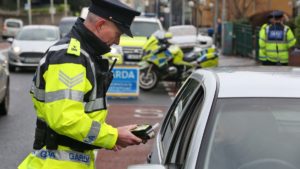 Gardaí will aim to keep the nation’s roads safe over Christmas by rolling out mandatory checkpoints for drink and drug driving across the country from this weekend.

More than 165 drivers are arrested each week for drink or drug driving, and Gardaí and road safety experts say an average of 17 people die and 142 are seriously injured on the roads at this time of year.

“This week marks the start of a six-week road safety enforcement campaign during which we will focus our attention on drivers driving under the influence of both alcohol and drugs, as well as targeting enforcement of other road traffic offences such as speeding, not wearing seatbelts and mobile phone use by drivers.

“Already this year, we have detected over 161,000 motorists speeding, almost 22,000 motorists using mobile phones while driving, and over 6,700 drivers and passengers not wearing seatbelts.”

“Your choice to drink and drive or drive under the influence of any intoxicant could have lasting consequences for you, your family and others. At best, you might lose your licence to drive, and at worst you could be responsible for your own or somebody else’s death, or serious injury.”

“The message really is that we will be relentless over this Christmas and New Year period, in terms of trying to ensure an environment where we don’t have those fatalities,” Deputy Commissioner McMahon explained.