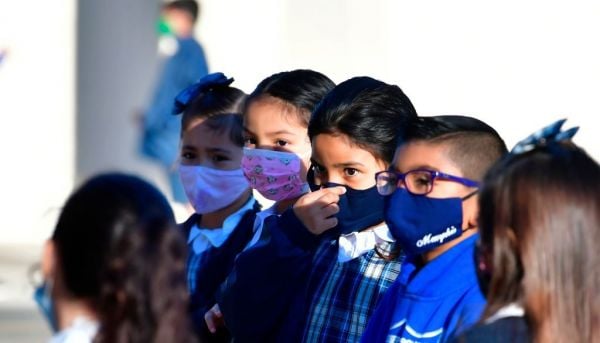 A member of the National Public Health Emergency Team (Nphet) has said it is time to consider mask wearing among primary school children.

Professor Mary Horgan, president of the Royal College of Physicians in Ireland, said the increase in infections among primary school children is higher than the rest of the population.

The issue is expected to be discussed by Nphet when it meets on Thursday, though the Government does not intend to introduce any new restrictions this week, according to The Irish Times.

If a recommendation is made by Nphet, it is likely to be considered by Government next week.

Speaking on RTÉ’s Morning Ireland, Prof Horgan said there were several reasons for the case rise in school children. “Firstly they are a group that haven’t been vaccinated. We know how effective vaccines are,” she said.

“Secondly they don’t still use masks. The rest of the population do. So it may be a time to consider that. Because we do want to reduce the infection as much as we possibly can.”

The latest figures show that primary school-aged children now have the highest Covid incidence of any age group, with some 10,000 positive cases in the past fortnight.

A report from the Health Protection Surveillance Centre (HPSC) also notes that the infection rate for primary school-aged children has been rising since mid-October, but the risk of transmission within a school still remains “low”.

Prof Horgan said it was likely the European Medicines Agency would recommend vaccination in the five- to 11-year-old age group within the coming days.

Prof Horgan said she hoped Ireland can avoid a lockdown, which she described as a "blunt instrument" and a "last resort".

"We have developed loads of tools that we need to effectively use to avoid a lockdown. The current situation in hospitals is steady. It [the virus] has always been uncertain and unpredictable so we do need to watch things very closely," she said.

She also acknowledged the difficulties around getting a Covid test given the rate of referrals and stressed that the public was continuing to "step up to the plate".

"[The public] are doing what is asked of them and that is reflected in that steady state we are seeing at the moment. Symptoms of Covid are very similar to symptoms of other respiratory viruses. Thankfully we are seeing very little influenza.