The 2021 Federation of Irish Sport Volunteers in Sport Awards, which will take place virtually on December 7th, 8th and 9th next week, will see three hugely admired and respected figures in Roscommon recognised and honoured for their amazing dedication to volunteering. The 2021 award recipients were announced this afternoon and they included Máire Allen and Jacqueline McCormack of Roscommon Special Olympics club, and Joe Moore of St. Aidan’s GAA club.

Each of the 32 counties is allocated one award and Roscommon’s county award went to Joe Moore, a stalwart of St. Aidan’s GAA club.

Since the club’s inception in 1956, Joe has been involved in every aspect of St. Aidan’s, from playing, to managing, to refereeing and everything in between. A Junior Championship win in 1966, in which Joe lined out as right wing forward, was the launching pad for the club to continue to grow from strength to strength, in no small part due to Joe’s Herculean efforts on and off the pitch. At his first ever club meeting, Joe was appointed as Club Secretary, remaining in that role for some time. He has also committed his time to refereeing, taking charge of the 1975 senior county final and replay between Roscommon Gaels and Castlerea St. Kevin’s.

Today, Joe is still heavily involved in the club, as Club President and as part of the Parks Committee, and is ever-present by the pitch on match day. 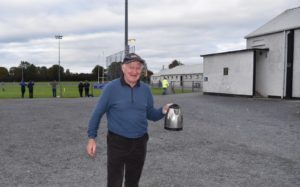 Joe Moore is always on hand in Ballyforan when needed, as he has been for over half a century.

In addition to Roscommon’s county award, Máire Allen and Jacqueline McCormack have also received a Special Recognition Award for their amazing work with Roscommon Special Olympics Club. They have dedicated their time tirelessly over the last number of years and more recently, in the face of the challenging circumstances caused by Covid-19, did everything to ensure the club’s members remained fit and active throughout the various lockdowns. 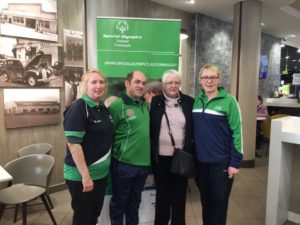 Jacqueline (left) and Marie (right) have been tireless in their devotion to Roscommon Special Olympics club.

Throughout September and October members of the public, sports clubs and governing bodies were invited to nominate an individual whose contribution to sport and physical activity in Ireland has made a real difference to their community, club or county. The nominations and award recipients were selected by a judging panel consisting of 12 individuals drawn from sports administration, the volunteer community and media, and included former Director General of the GAA, Paraic Duffy, RTÉ broadcaster, Marie Crowe and CEO of Gaisce, Yvonne McKenna.

Speaking about the awards, CEO of the Federation of Irish Sport, Mary O’Connor said: “Despite another very challenging year for sport, we have once again seen how important volunteering has been to communities across Ireland. We have an enormous amount of gratitude for the army of volunteers who have ensured that sport could take place in a safe and controlled manner. Whether it be on pitches, courts, tracks, pools or even community halls across the country, the volunteers are always there to make sure sport and physical activity continues to take place around Ireland. It gives me immense pride to be able to recognise so many of these volunteers at next week’s virtual Volunteers in Sport Awards and I would like to extend my warmest congratulations to all of this year’s recipients.”

Managing Director of EBS, Paul Butler, commented: “EBS is delighted to partner with the Federation of Irish Sport once more to honour and recognise the everyday heroes around Ireland who make sure sport happens every day. EBS has been involved in local communities around Ireland for over 80 years and we are delighted to showcase the tremendous work these volunteers do for sport throughout their communities.”

The awards will be streamed live each evening from 7pm on the Federation of Irish Sport’s Facebook page here: https://www.facebook.com/federationofirishsport/ with the awards schedule listed below:

For more information on the awards, visit http://www.volunteersinsport.ie/