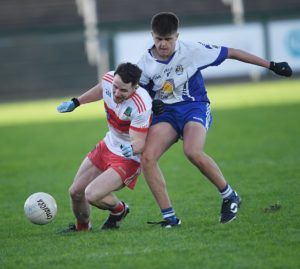 Ciaráin Murtagh struck a vital first half goal for St. Faithleach’s at the Hyde this afternoon

Roscommon Intermediate champions St. Faithleach’s will contest a Connacht final against either Mayo Gaels or Naomh Anna early in the new year, but it could all have been very different as they played second fiddle to St. Farnan’s of Sligo for long stretches of this afternoon’s contest at the Hyde.

The Ballyleague side were the clear favourites to advance before the game started and in the early stages it was all going according to plan, as a goal from Ciaráin Murtagh and a couple of successful advanced marks from Connell Kennelly left them 1-3 to 0-2 ahead at the first half water break.

However a black card for David Rooney slowed their momentum and by half-time the contest was something of a dogfight, with St. Faithleach’s 1-4 to 0-4 in front.

The wheels really came off after half-time when a series of frees from Sligo intercounty player Paddy O’Connor pulled the visiting side level, while a second yellow card for full back Mikey Cox late on meant that there were a fair few nervous moments for the home support during the five minutes of stoppage time, before the final whistle sounded at 1-6 to 0-9.

O’Connor goaled for Farnan’s early in extra time but Faithleach’s finally found their form and their attacking edge from that point, with Diarmuid Murtagh, Jonathan Hussey and Darragh Hussey all on target as they moved in front and then held on in a frantic finish.

Elsewhere this afternoon, Oran weren’t quite firing on all cylinders but they did enough to overcome Shannon Gaels in the Tansey Cup final, while there was disappointment for St. Dominic’s in the Connacht LGFA intermediate championship, with Castlebar Mitchels prevailing by 1-13 to 1-5 in their semi-final contest in Castlebar.

For full reports on all these games, see next Tuesday’s Roscommon Herald.