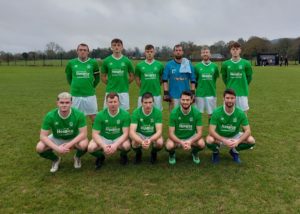 The Boyle Celtic side that prevailed against Portlaw United in the last round of the FAI Centenary Junior Cup.

The two Roscommon and District Football League sides left in contention for FAI Centenary Junior Cup honours now know their fate in the last 32 of the competition following this week’s draw.

Boyle Celtic will make the long journey to Waterford to face Villa FC, one of the biggest clubs in the south-east of the country. Villa fields a total of 27 teams, ranging from U-11s all the way up to the Premier team. Current Republic of Ireland international Jayson Molumby is a former club player.

However, Jake McCrann’s side will be buoyed by their last trip to the south-east in the fourth round where goals from Louis Garvin and Shane Battles secured a 2-0 victory against Waterford League Division One side Portlaw United.

Ballinasloe Town have been handed a more favourable draw, with a home game against Mayo League champions Ballyheane AFC on the cards.

They defeated one of the Kerry League’s top sides, Listowel Celtic, 3-2 in the last round. Their goals came from Darragh Concannon, Liam Lynch and Mark Duffy.

Ballyheane AFC, based in Claremorris, have recent history against teams from the Roscommon and District League, having beaten Cloonfad United 3-1 in the Connacht FA Cup last weekend.

The games are scheduled to take place on Sunday, January 16th, 2022.