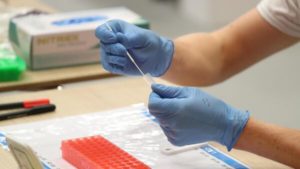 There are currently no Covid testing slots available at the county’s PCR testing centre or in two other local centres.

This morning the HSE’s Covid test booking website showed no tests available at the Castlerea Testing Centre, the pop-up centre in Athlone, or at the Tuam Testing Centre.

However, the HSE does advise that if there are no appointments currently available to check back later, as appointments may become available later in the day.

The HSE’s lead on the vaccination and contact tracing programmes Damien McCallion has acknowledged that the number of Omicron cases is “substantially higher” than the levels officially recorded through PCR tests.

Speaking on both Newstalk Breakfast and RTÉ radio’s Morning Ireland, Mr McCallion encouraged anyone with a positive antigen test to act as if they had the virus and to follow public health guidance.

Access to PCR testing was “challenging” at present, he said, which was why changes had been introduced for people aged four years to 39.

He predicted that the testing system, which now has a capacity of 650,000 tests a week when PCR and antigen testing is combined, will remain “under strain” for at least a week.

“There are definitely higher numbers of the disease out there,” he said. “We’re seeing this globally with all testing systems under strain given the high transmissibility of this particular variant.”