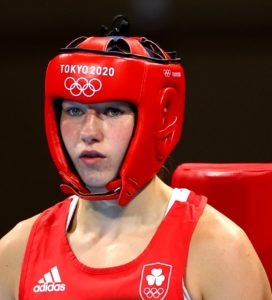 Once Aoife O’Rourke became the first Roscommon woman to qualify for the Olympic Games, she was always going to stop the county in its tracks last July, writes IAN COONEY

If ever there was a snapshot as to why Aoife O’Rourke is so cherished and revered as a sporting idol in County Roscommon, it was the moment she was about to enter the ring at the Toyko Olympic Games.

Ahead of the biggest fight of her life, on the biggest stage of all, against Chinese boxer Li Qian, the smile to beat all smiles broke out across the Castlerea boxer’s face. For the people that knew her most, particularly around Tarmon in West Roscommon, this was the girl they knew — a quiet, unassuming role model. Just an ordinary girl fulfilling an extraordinary dream.

O’Rourke’s Olympic experience would only last nine minutes but, crucially, she stuck to her core values. She attacked her Chinese opponent, who would go on and win the silver medal, with every fibre of her being but, in the end, inexperience would end up being her downfall.

Hearing O’Rourke talk afterwards about “understanding the process” demonstrated that she was willing to learn quickly ahead of what, hopefully, will be a return to a more normal Olympics in Paris in 2024.

“I didn’t know much about her. I had heard people saying she had X, Y and Z titles. But I didn’t pass any heed of that. I still believed that I could beat her. I talked with the coaches. I thought that the tactics really played to my strengths — to put the pressure on her, which I felt I did. But I think she was just too skillful and too experienced.

“The coaches felt that if I was to stand back, I wouldn’t have beaten her. There was never a stage in the fight where I felt she was really connecting with her shots. She wasn’t hurting me.

“I suppose I did feel hard done by with unanimous result, but I was able to accept it in the knowledge that she had that experience and skill. Overall, I was really happy with my performance,” she explained.

Having experienced what the Olympics entails, O’Rourke went on to reveal that her focus has already been sharpened for the myriad of possibilities appearing on the horizon.

“When I went into the High Performance in 2018, there were people talking about Tokyo but I just went with the flow. I didn’t really believe it. I didn’t realise back then that it was what I was really working towards. I was going to the competitions I was being sent to, not knowing that it didn’t matter if you won or lost. It was about getting experience and building yourself up for Tokyo.

“So, with a view to Paris, whatever I get between now and then, I’ll use it as an experience. The more competitions I go to, the better I’m going to get and the more comfortable I’ll be in the ring. Even things like getting your pre-fight routine down to a tee are really helpful.

“I look at things now and I see that Paris is a realistic target. I can make Paris, and that whatever I do between now and then is going to help me. In 2018, I eventually ended up in Tokyo by just going with the flow. I worked really hard, but it wasn’t my be-all and end-all.

“I understand the process now. I know what it takes to get there, and not only that I know what it will take to be an Olympic medalist. The whole experience has opened up my eyes a bit more.

“I have a purpose now in everything I do. I know what I have to do to become a calmer, more composed and skillful boxer. I’ll know when to put the pressure on when it’s needed and not have to go the full 90 for the three rounds,” she told the Roscommon Herald.

In June, O’Rourke became the first Roscommon woman to qualify for the Olympic Games when she beat Poland’s Elzebieta Wojcik at the Grand Dome in Paris to take her place on the Team Ireland flight to Tokyo.