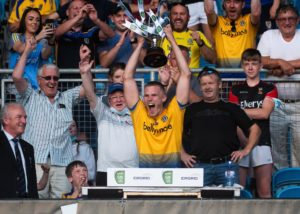 As expected, Roscommon senior football manager, Anthony Cunningham, has given a host of new players the chance to impress in this evening’s FBD Connacht League semi-final against Sligo at the NUI Galway Connacht GAA Dome (throw-in at 6 p.m.)

Only Eddie Nolan, Donie Smith and Conor Cox are retained from the starting 15 that lost out to Galway in last July’s Connacht senior football semi-final at Dr. Hyde Park.

Goalkeeper Conor Carroll, Colin Walsh and Shane Cunnane are graduates from last year’s U-20 panel that reached the All-Ireland final. Eoin McCormack and Diarmuid McGann have been rewarded for their fine club form with St. Dominic’s and Strokestown respectively and also make the cut.

Andy Glennon from Michael Glaveys makes a welcome return to the forward line, while it is hoped that Smith and Cox can provide the bulk of the team’s scoring power up front.