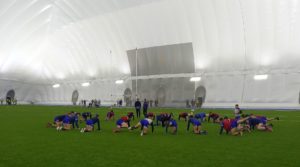 The Rossies warming up at the NUI Galway Connacht GAA Air Dome this evening.

Roscommon will play in their eighth successive FBD League final on Friday evening next after goals from Diarmuid McGann, Enda Smith and Ben O’Carroll saw them defeat Sligo by 3-23 to 0-21 at the NUI Galway Connacht GAA Air Dome this evening.

Anthony Cunningham’s new-look side played some excellent football, with Eoin McCormack, Shane Cunnane, Cathal Heneghan and Diarmuid McGann showing up well, but it was Conor Cox who stole the show with 0-11, including eight from play.

Roscommon led by 1-13 to 0-9 at the break, with McGann netting in first-half injury time. But goalkeeper Conor Carroll made a spectacular penalty save from Niall Murphy in the last action of the half to keep his side in the ascendency.

Murphy, who ended up with 0-13, and Pat Hughes continued to cause problems for Roscommon’s full-back line and Sligo were back to within three points at one stage in the third quarter.

But Roscommon made a raft of substitutions, and two of them — Enda Smith and Ben O’Carroll — netted late on to complete a very satisfactory evening’s outing for the 2019 Connacht champions.