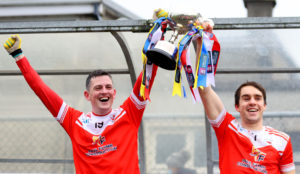 Emotion and elation greeted James Molloy’s final whistle as red and white-clad supporters invaded the field to celebrate with their heroes who will now face Leinster champions Kilmacud Crokes in the All-Ireland semi-final at the end of January.

Pearses followed in the footsteps of Castlerea St. Kevin’s, Roscommon Gaels, Clann na nGael and St. Brigid’s to become the fifth Roscommon team to win the title as joint captains Emmett Kelly and David Murray got their hands on the Shane McGettigan Cup.

Paul Carey produced a Player of the Match performance, hitting 0-8 over the hour, including five sumptuous points from play.

Hubert Darcy’s early goal from the penalty spot gave Pat Flanagan’s men a dream start, and despite losing goalkeeper Paul Whelan to a black card in the second quarter, which necessitated Darcy deputising as goalkeeper, the Roscommon champions were 1-3 to 0-4 in front at the interval.

Pearses played champagne football in the opening 13 minutes of the second half as Carey hit five points and Darcy bisected the posts from 35 metres.

But Charlie Bourke’s goal, in what was the last action before the water break, handed Knockmore a lifeline, to leave only two points between the teams, 1-9 to 1-7, at the three-quarter stage.

The contest continued to ebb and flow with Carey, Emmett Kelly, Ronan Daly and Tom Butler finding the range for the champions-in-waiting.

There were hearts in mouths when Aiden Orme’s effort just cleared the crossbar deep into injury time, but Pearses were soon confirmed as provincial kingpins.

As the Pearses players and management returned to their victorious dressing room, they belted out the well-known song “Sweet Caroline”. 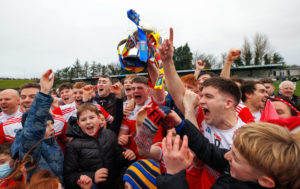 Pádraig Pearses players celebrate with their supporters after winning the Connacht club title for the first time. Picture: INPHO/James Crombie