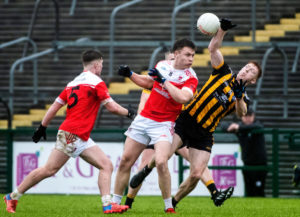 Pádraig Pearses enjoyed a famous victory against Mountbellew-Moylough. Can they rewrite the history books against Knockmore? Picture: INPHO/Evan Logan

While this afternoon’s Connacht club final between Pádraig Pearses and Mayo kingpins Knockmore is being viewed as a 50/50 game, KEVIN EGAN argues that the Roscommon champions must look at things differently on the basis of the quality and maturity within their ranks…

In a lot of ways, Pádraig Pearses will feel that they’re looking into a mirror when they line out against Knockmore in this afternoon’s Connacht final. The North Mayo side didn’t rack up decades of hard luck stories down the years and actually had a very good record in county finals up until the turn of the Millenium.

However, one draw and five defeats in six starts from 2000 through to 2019 was enough to create an aura of misfortune around the club, up until they overcame Breaffy in the 2020 county decider. Going into that game, they were wrestling with a lot of the same demons that haunted Pearses up until the final whistle of the 2019 county final at Dr. Hyde Park.

Now, in 2021, Knockmore have put their breakthrough year behind them and are looking to make an impression on the provincial stage, rather than simply contenting themselves with local glory and the ending of a famine.

On the field, their strengths are much more on the defensive side of the ball, with their leader and talisman — Kevin McLoughlin — deployed in the middle of the field. This is not because it’s necessarily his best position, but because they want him in the thick of the action, involved in everything.

With four clean sheets in a row in big knockout games, Knockmore have mastered the art of making sure that first and foremost, you have to stay contention, then find a way to win. They looked all at sea in this year’s Mayo semi-final against a raw Garrymore team, but two goals in a short space of time in the third quarter changed the game, because Garrymore knew deep down that they were unlikely to carve out the same type of chances and reply in kind.

Likewise in the county final against Belmullet, once James Ruddy hit the net, Knockmore were always in control of the threat posed by Ryan O’Donoghue, and consequently always in control of the game. Their game management in the latter stages of contests is superb, and not unlike Pearses, they’ve found ways to wear teams down and finish strongly, thanks in no small part to significant contributions from their bench. Look out for Charlie Bourke and Keith Ruttledge, in particular, to make quite an impression once they join the fray on Sunday.

For one final parallel, both teams have one solid attacker who consistently performs well at club level and has been involved with county teams (Peter Naughton/Hubert Darcy) and one hugely impressive younger player with the world of potential alongside them (Aidan Orme/Paul Carey).

Yet there are contrasting aspects too, and two in particular. James Stephens Park isn’t Knockmore’s home ground, but they know it inside out, even better than MacHale Park. Think Kiltoom for Pearses, but in reverse. So, they have one big advantage that Pat Flanagan’s troops certainly don’t.

On the other side of the coin, Pearses have played in a Connacht final two years ago, and will take confidence both from that, and the fact that they beat the better opposition in the semi-final of this year’s competition.

All of this, alongside the near-certainty of a low-scoring contest in harsh conditions, would suggest a 50/50 contest.

The challenge for Pádraig Pearses this week is to see it differently to that, because in terms of quality and maturity, they should be a step ahead of their opponents.

When it comes to emotional development, Knockmore’s journey in 2020 was broadly similar to that undergone by Pearses in 2019. Each won their breakthrough championship after conquering a massive mountain in the quarter-final stage — Knockmore by beating Ballintubber, Pearses by beating St. Brigid’s. They went on from there to take advantage of other relatively inexperienced opposition on the big day, when they might have struggled to beat a club side that was used to winning county finals.

Yet Pearses went on to experience Connacht club championship football, going through what can only be described as the toughest test of all in taking on Corofin. Knockmore were denied that same opportunity.

Pearses had an extra year in between to learn that winning doesn’t just come automatically and that it wasn’t a case of make your breakthrough and then it’s all plain sailing. 2020 taught them both the value of a very deep panel, as the lack of impact subs cost them dearly, and how it’s not good enough to stand still as you will get devoured by some ravenous pretender to the throne who is chomping at the bit to be the best that they can be.

In 2021 the Woodmount-based club came back and still showed signs of lacking the kind of edge and intensity that made them what they are in the early stages of the championship. Gradually they found their nature and made sure to win the county title the right way, going through Boyle, St. Brigid’s and Clann na nGael. In every contest they were the better team, comfortably so in some cases, but the shrewdness and talent of their opposition meant that they had to stay honest right to the end. Against a very highly-rated Mountbellew-Moylough side, they had to take that to another level again.

Garrymore, Belmullet and even Tourlestrane were the opposite in their games against Knockmore. They were all capable sides, albeit not quite at the same level as the clubs Pearses faced, but they all lacked that ability to give themselves every chance to win the game. They didn’t ask the same questions, they didn’t play their best football in the final quarter, and they didn’t force Knockmore to find a truly elite level to survive. Ballintubber had that edge in the Mayo SFC quarter-final, but they were short Cillian O’Connor and several other players, and aren’t the club that they once were, even aside from the lack of their top scorer.

The high standing in which Mayo football is held nationally means that Knockmore will be hugely respected as provincial and All-Ireland contenders. But in recent years, there has been a levelling of standards in the county, to the point that as many as ten teams start the championship with a realistic chance of lifting the Moclair Cup. That is in part because of the generally high level of play across the board, but also the fact that there isn’t a team in the county operating at the standard that Castlebar Mitchels or Ballintubber would have produced in the last decade.

Roscommon doesn’t have that same depth, but at the top level of club football in the county, the standard is very strong, comparable with anything in Connacht right now. Moreover, in a championship season where a lot of big name sides have already crashed and burned, Pearses may yet find that there isn’t anyone noticeably ahead of them anywhere in Ireland.

Certainly, the fact that the favourites for the All-Ireland are a club that won their first ever county title this year would suggest that this is a very open competition.

But that’s a matter for another day, in a different month. For now, the challenge for Pádraig Pearses is to understand that the chatter about how this Connacht final is going to be very low-scoring and very closely-fought is all well and good, but there is an art to winning close games, and they have mastered it.