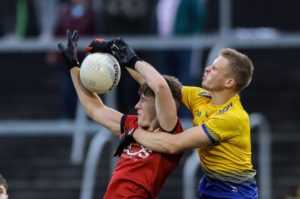 Colin Walsh in action for the Roscommon U-20 football team during last season’s All-Ireland semi-final against Down. Picture: INPHO/Lorraine O’Sullivan

One of Roscommon’s up and coming GAA stars contributed to a piece of Sigerson Cup history on Tuesday evening.

Last year’s county U-20 football captain, Colin Walsh from Oran, lined out for Maynooth University at centre-back against DCU and kicked the 19,000th point in the competition’s history during his side’s 2-17 to 1-9 defeat. Walsh’s clubmate James Fitzpatrick started the game at full-forward for Maynooth.

It has been a whirlwind few days for Walsh, having made his senior intercounty debut for Roscommon during the 3-23 to 0-21 FBD League semi-final victory against Sligo on Saturday evening last.

By my calculations, the 19,000th ever total point in the history of the @HigherEdGAA Sigerson Cup was scored tonight by Colin Walsh (@MaynoothUniGAA & @ORANGAA).

(thanks @Score_Beo for the confirmation)