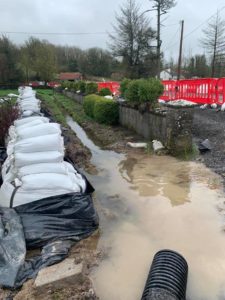 The flooding of Lough Funshinagh has caused havoc for nearby home and landowners.

Roscommon County Council has confirmed it will be seeking permission to restart flood works at Lough Funshinagh.

In a brief statement to this paper, the local authority said it will be seeking to have the stay on the works, ordered by the High Court in December, discontinued tomorrow, Friday, January 14th.

It also put an interim stay on further construction works until January 14th, when it would consider submissions from the council to lift the stay. FIE will be seeking the continuation of the stay on further works pending the determination of the proceedings.

Cllr Laurence Fallon, who lives beside the lake, welcomed the council’s decision, saying it had no choice.

“I am hopeful that it will be successful because the lake is rising, even after the driest spell that I can remember in the autumn and winter. Only for that the levels would be much more severe and it is still very severe,” the independent councillor said.

“In my opinion, the council has to defend its actions because these works are the minimum that is required to save a number of families around the lake. There is no danger to the environment or other areas being flooded. Anything being done would be beneficial both to the environment and the families affected.”

He said that he saw no justification for FIE’s actions and again called on it to withdraw their objection. He added that the proposed removal of approximately 2 million cubic metres of water from the lake to Lough Ree using pumps and the pipe system, was “the bare minimum to keep the water at bay”.

“We are trying to save people from being put out of their homes and businesses, and banished to somewhere else. That’s all.”

He also warned that if the lake flooded homes and farmyards it would enter septic tanks, causing pollution.

“We have just commenced pumping at two families because the water is beginning to encroach on them. It is a very worrying time for everyone.”