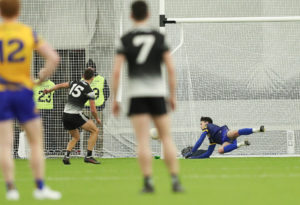 Conor Carroll, seen here saving a penalty for Roscommon against Sligo in the FBD League semi-final, was on Sigerson Cup duty for NUI Galway on Wednesday evening. Picture: Bernie O’Farrell

A couple of Roscommon players were part of the NUI Galway side that progressed to the second round of the Sigerson Cup last night.

Conor Carroll and Cathal Heneghan, who featured for Roscommon during their FBD League semi-final victory against Sligo last Saturday evening, were involved in the game against Queen’s University that was abandoned after 58 minutes when substitute Seán Mulkerrins suffered a worrying-looking knee injury.

With an ambulance taking more than half an hour to arrive, it was agreed amongst the teams that NUIG would be awarded a two-point victory.

Ironically, Carroll and Heneghan, who scored a point, could be lining out against some of their NUI Galway team-mates like Matthew Tierney, Tomo Culhane and Seán Kelly when Roscommon face Galway in tomorrow (Friday) evening’s FBD Connacht Senior Football League final at the NUI Galway Connacht GAA Air Dome.