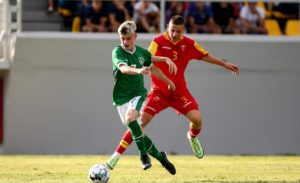 Christian Donlon Goncalves on his international debut for the Republic of Ireland last September.

A young Roscommon soccer star, who made his international debut in September, is on the move, joining one of the biggest clubs in the country.

Christian Donlon Goncalves, who donned the green of Ireland for the first time in a U-15 international friendly against Monteengro, is on his way to Shamrock Rovers.

The former Ballyboro FC star, who lined out for St. Faithleach’s and won a Community Games gold medal for the county, was plying his trade with the Mayo SL in Castlebar, but it was only a matter of time before clubs in Dublin took a greater interest in the Cloontuskert native.

Now Shamrock Rovers have come calling, recognising Christian’s burgeoning talent — another stepping stone towards what hopefully will be another few international appearances for the Republic of Ireland in 2022.