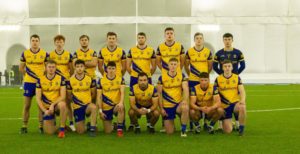 Roscommon’s starting 15 against Sligo last Saturday evening. Eleven of the side are retained for this evening’s FBD League final against Galway. Picture: Bernie O’Farrell

Roscommon senior football manager Anthony Cunningham has made four changes to his starting 15 for this evening’s FBD Connacht League final against Galway at the NUI Galway Connacht GAA Air Dome (throw-in at 5.45 p.m.).

Patrick O’Malley comes into goal in place of Conor Carroll, while Enda Smith makes his first start of the season at midfield. Andrew Glennon and Ciarán Lawless get the nod in the Rossies’ half-forward line.

Eleven of the personnel that started the 3-23 to 0-21 victory against Sligo are selected for this evening’s game.

Colin Walsh and Eoin McCormack form Roscommon’s central defensive spine once again. Ultan Harney, who lined out at centre-forward against Sligo, is picked at wing-back.

Cathal Heneghan, who started in the half-forward line against the Yeats County, joins Donie Smith and Conor Cox in the full-forward line.