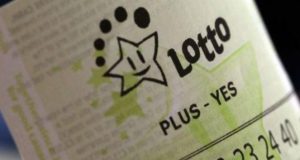 The National Lottery continue to appeal to players to purchase their tickets early ahead Saturday’s record-breaking Lotto draw.

Lotto players all over the country are preparing to see the Lotto jackpot roll sequence, which began on Wednesday 9th June 2021, come to a celebratory finale this Saturday. Tomorrow night’s draw is guaranteed to see one or more Lotto players win or share the record-breaking €19.06 million Lotto jackpot in a ‘Will be Won’ event this weekend.

If tomorrow night’s draw sees a player(s) match all six numbers, they will officially become Ireland’s largest ever Lotto jackpot winner and claim the €19.06 million jackpot.

Due to the jackpot cap in place, the additional funds which would usually be added to the jackpot will continue to flow-down to the next prize tier at which there is a winner. In Wednesday night’s Lotto draw, we saw three players win €253,314 each after matching five numbers and the bonus while in last Saturday’s draw, we saw 24 players match five numbers to win €33,181 each.

If the ‘will be won’ Lotto jackpot is not won outright, the full value of the jackpot prize will flow down to the winner(s) of the next winning prize tier. For example, if there are no players who match 6 numbers in the draw but there are winners at the Match 5+Bonus prize tier, they will win the €19.06 million jackpot as well as the additional funds that would usually go to the jackpot.

Ahead of the highly anticipated draw, a National Lottery spokesperson reminded players about the importance of purchasing their tickets early ahead of tomorrow night’s draw.

“This Saturday is set to be a truly memorable night in the history of the Lotto game in Ireland. Following the longest roll sequence that we have ever seen, we are excited to see that the record-breaking €19.06 million jackpot is guaranteed to be won this weekend. We are reminding all of our players who are planning to buy a ticket for this weekend’s draw that it is important to purchase early ahead of the 7.45pm cut-off time for sales on Saturday evening to avoid disappointment. We would advise our players who are buying their ticket in retail to follow public health guidelines while doing so and to be mindful of queues. Don’t forget that tickets can be purchased in-store, through the National Lottery app or at www.lottery.ie.”