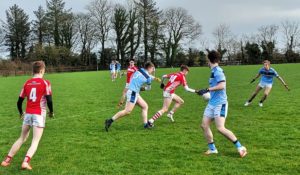 Darren Gately breaks out of defence with possession for Roscommon CBS in this afternoon’s game against St. Gerald’s.

Roscommon CBS simply didn’t have the firepower to compete with St. Gerald’s of Castlebar in their Connacht Colleges championship clash at the Connacht Centre of Excellence this afternoon, as they crashed out of the premier schools football competition in the province after a seven-point defeat.

Centre forward Darragh Reilly and the Castlebar Mitchels duo of Bob Tuohy at midfield and Ben McHale at corner forward were the key figures for St. Gerald’s, who burst out of the blocks with the first four points of the game.

A black card for full forward Oran Groarke left the Mayo school short a player on the field and that opened the door for Roscommon CBS to creep into the game, with Darren Gately kicking the first score just before the water break. Two points from Shane Walsh meant the lead was still four at half time, 0-7 to 0-3.

There was a brief flash of hope for the Roscommon students when Aodhán Looby fired a good pass into Gately and the Creggs man rifled the ball into the roof of the net from close range to reduce the gap to a single point at the 40 minute mark, and almost immediately the CBS had a chance to take their first lead of the game. A poor kickout from St. Gerald’s was seized by Karol Feerick and he played in Gately, who was fouled but got a quick free away to DJ Hession. From around 12 metres out the dual player pulled his shot narrowly wide of the near post, and on the next attack Darragh Reilly split the posts with a majestic kick from 40 metres out to put St. Gerald’s back on the front foot.

They never looked back, adding six of the next seven points to secure their passage through to a quarter-final clash with St. Jarlath’s next week.

For a full report and details from this game, be sure to check out next Tuesday’s Roscommon Herald.