The clash of Roscommon CBS and St. Gerald’s of Castlebar in the first round of the Connacht Colleges Senior ‘A’ football championship will be the headline act for Roscommon supporters on a packed afternoon of action all across the province, with most local schools involved in straight knockout action.

Roscommon CBS, who have yet to play their county final clash against Abbey Community College of Boyle, will be led out at the Connacht COE by 2021 Roscommon minor captain Shane Walsh. The Oran midfielder will also captain his school as they attempt to upset St. Gerald’s, who won the Mayo county competition and are regarded as one of the front runners for the Aonghus Murphy Memorial Cup. 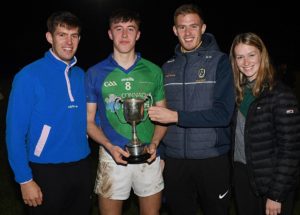 Shane Walsh (pictured here togged out for Oran/St. Croan’s) will be a key figure for Roscommon CBS today.

The winners of this game will play Connacht’s traditional kingpins, St. Jarlath’s of Tuam, in a quarter-final clash next week, while there will also be a lot of neutral interest in this afternoon’s fixture between a highly-rated Coláiste Baile Chláir side from Claregalway and St. Muredach’s of Ballina, who will feature Sam Callinan, who played corner back for Mayo in the FBD league against Galway.

At ‘B’ level, there will be local interest in the fortunes of Garbally College and St. Nathy’s of Ballaghaderreen, but both of those schools have received byes through the first round and won’t tog out until next week’s quarter-finals.

In the ‘C’ championship, Coláiste Chiaráin will make the short trip to Mountbellew to take on Holy Rosary College, there will be a handful of Michael Glaveys players involved with Dunmore Community School as they travel to play Balla secondary school in Mayo, while Scoil Mhuire Strokestown, featuring Roscommon players like Colm Neary and Shane McGinley, will play host to Ballyhaunis Community School.

There will be a local derby in Ballygar with Coláiste Mhuire taking on Roscommon Community College in a ‘D’ championship fixture that will be watched very closely in the St. Ciarán’s and St. Aidan’s clubs, with players from both clubs represented on each side, but at this grade Abbey Community College are expected to go deep into the competition, backboned by so many Boyle players who reached last year’s Roscommon minor Division One final. Abbey CC will make the short journey to Charlestown today, to take on St. Joseph’s Secondary School from that town.